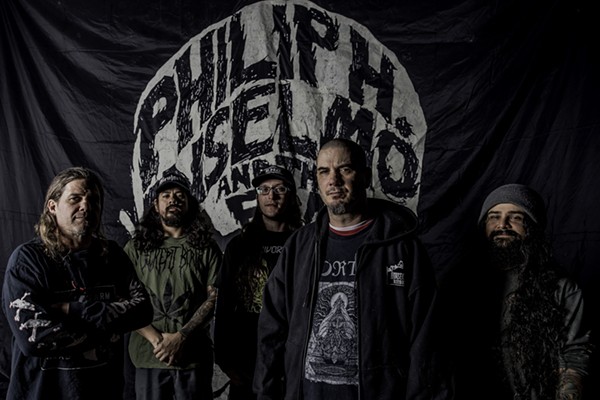 Is San Antonio still the Heavy Metal Capital of the World? The recent proliferation of pricey condos and Bespoke Bartenders may cause some
doubt, but judging by the long-haired, black-clad fans holding up devil-horn signs at The Rock Box last night, I’m going with: Sure! If not us, then
who?

After missing openers Wrathtongue and XIL (sorry, guys!), I caught the last few songs from local act Flesh Hoarder. They implored the crowd to “support Texas Death Fucking Metal!” and played a song called “Counterweight Suicide” as their thank-you for doing so.

Did they play their song “Fist Fucking a Fat Pig Named Liz”? I assume they did, but if so, I must have missed the dedication to Liz.

Australian grindcore band King Parrot took the stage next, and immediately kicked the energy level up 10 notches. Frontman Matt Young stalked the stage, ridiculing people for using their camera phones and dousing the crowd with bottled water. He also crowd-surfed and mooned the audience a few times. Good, clean fun! The band was tight and energetic, adding rowdy stage-patter
to the mix.

Finally, former Pantera frontman Phil Anselmo and his band The Illegals came out. I expected a wild man, but perhaps recent back surgery, past Pantera drama and ill-advised “white power” jokes in 2016 left Phil cautious. While imploring the crowd to rock out, he also asked the near the front not to fight, saying he didn’t want anyone to get hurt.

Anselmo can definitely still hold a stage, and the Illegals played with professional competence, but after the wild energy of King Parrot, it all felt a little somber. No one in the crowd seemed to mind, though. San Antonio still likes to rock out, at least for now.