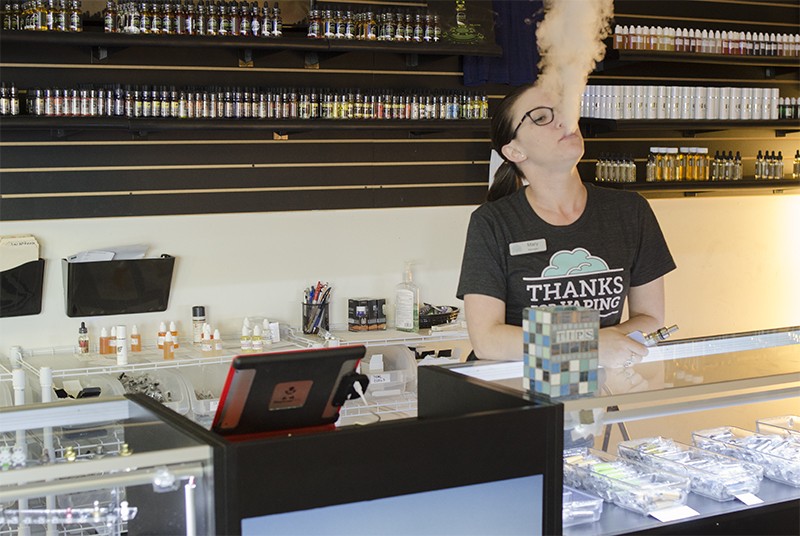 Velasquez, director of inbound sales at Career Point College, smoked traditional cigs for 25 years. She wanted to quit after losing both of her parents to cancer, so she ordered an e-cigarette online — just about the only place she could get her hands on one.

Though she readily took to her e-cig, also called a vaporizer, she'd sometimes slip back to smoking cigarettes simply because the new kind were so hard to find.

That's no longer a problem.

"Once [vape] stores opened up around here, I had no excuse," Velasquez, 47, told the San Antonio Current. "It changed my life."

Vaping has boomed nationwide in the past few years, San Antonio being no exception. Dozens of vape shops have sprouted up in the Alamo City, giving rise to a robust and nuanced culture of tinkerers, hobbyists and anti-cigarette crusaders.

Vaporizers come in a range of shapes and sizes, but they're basically battery-powered smoking devices that heat up a chemical cocktail, known as "juice," to produce an inhalable vapor. Each juice flavor comes in varying strengths of nicotine — some are actually nicotine-free.

Most people, like Velasquez, start vaping to stop smoking traditional cigarettes. But even after kicking the habit, many stick around after becoming fascinated with vaping culture: trying different flavors, experimenting with vaporizer modifications and tapping into the vast online network of fellow vapers to swap tips and tricks on blowing the biggest clouds.

The community aspect is what attracts many vapers, according to Josh Brown, an employee at the North Side shop Vape Air Lounge.

"People like the flavor and hanging out at the shop," Brown said. "You get to sit back and kick it with people who have similar interests, talk shop."

Brown's entire family — mother, father and even grandmother — quit smoking cigarettes by switching to vaporizers. Like many vapers, he raves about his improved health, the money he's saved and no longer smelling like an ashtray.

The jury's still out on long-term health concerns when it comes to e-cigs; medically, it's just starting to be researched. But the overall consensus thus far is that they're not as dangerous as cigarettes.

Vaping also transcends generations. Although users dkew young, it's not unheard of to meet senior citizens taking to this cultural phenomenon.

A typical e-cig starter kit costs about $60, with a one-ounce bottle of juice running about $20.

But there are more elaborate, expensive options. Upgrades are available for every part of a vaporizer and dedicated vapers drop serious cash to get their gear just right.

Brown built himself a customized model just so he could blow gargantuan vapor clouds — shelling out $300 in parts.

Randal Sterling's story is a common one in vaping circles. He smoked for decades and could never kick the habit until he picked up vaping.

"It was a eureka moment," Sterling said, describing his first puff of an e-cigarette in 2011 at a mall kiosk.

But Sterling took his vaping obsession further than most. The former radio and television ad salesman ordered $600 worth of vaping supplies from China and sold them at a marked-up price to customers and colleagues in SA.

In a few months, he was running a store out of his garage. By the start of 2012, he had moved into his first brick-and-mortar location, Thanks for Vaping, in a business park on Blanco Road.

Sterling's business has boomed with the San Antonio vaping scene. He sold $60,000 worth of products a month when he started the business. Last year, he almost topped $3 million in sales.

Like many vape shops, Sterling's stores  — he's got two now, with a third on the way — are part lounge, part workshop and part showroom. Tall barstools sit around two circular tables topped with dozens of juice flavors that customers can sample. At the counter, columns of dense smoke tumble out of employees' nostrils, vaporizers clutched in hand like Linus' blanket.

Most shops tend to keep regular business hours, though some stay open late on weekend nights for social events.

Sterling's shop was one of the first in the Alamo City. Despite the growth of his business paralleling the industry's overall expansion, Sterling expects some vape shops to eventually shutter.

At its peak about a year ago, San Antonio had about 75 vape shops. There are now about 50, nearly all clustered on the North Side.

Whether the market is still oversaturated or stable depends on whom you ask.

"We're going through a period of expansion and then we're going to see a period of consolidation. That's kind of a natural phase of business, a cycle," said Sterling, whose vaping business has now become a full-time gig.

But Bill Maxey, owner of Bad Wolf Vape, said that the SA vape scene is "behind" other metropolitan areas, with room to grow. Dallas and Houston both boast more than 100 vape shops. There are around 60 in Austin.

Maxey smoked Marlboro Gold 100s for 26 years — and he was committed.

"I was going to die with a cigarette in my mouth. Thankfully I found [vaping]. It was an alternative, and it worked for me," said Maxey, 45.

Now he and his wife own two vape shops in SA. He still works full time in IT, taking night shifts at his shops. For him, helping people quit smoking through vaping is a passion.

Shops such as Thanks for Vaping and Bad Wolf Vape try to cultivate a professional and positive image. They distance themselves from head shops and preach proper vaping etiquette to their customers: don't vape in non-smoking areas, don't condescend to non-vapers or smokers, don't blow vapor in people's faces.

Doing so can help San Antonio avoid the regulatory fate of other locales. Though various municipalities have outlawed indoor vaping, it's still legal in SA. And there are few regulations for shop owners, other than the new state law barring e-cigarette sales to minors.

Members of San Antonio's vaping community want to keep regulations to a minimum — particularly since the local vaping wave may not have yet crested.

Bonnie Herzog, a national beverage and tobacco analyst with Wells Fargo, said that e-cigarette sales could outpace traditional cigarettes within a decade.

Herzog estimated that the domestic vaping market will reach $3.5 billion by the end of 2015 — a full $1 billion stronger than 2014.