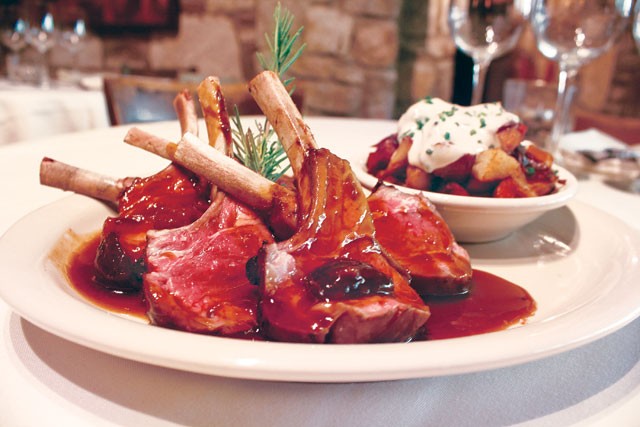 Dolores del Rio was a dump. Fortunately, the lighting was dim enough that it mostly didn’t matter. When it closed, my only thought was to wonder why it hadn’t happened sooner.

Daylight is now not to be spurned with the determination of Bela Lugosi. The new owners of double-l Bella have cleaned the old girl up to the point that she can now be said to look good for her age: there is a genuine chef in the kitchen, wine transcends the jug genre, service is professional, restrooms are no longer hidden, and even the entertainment is more than tolerable. Most of the contented-looking diners I encountered on two occasions likely have no idea how far things have come.

There is a ways yet to go in the kitchen, but faults, such as they are, are sins of inexperience, not indifference. Your meal will begin with a whole-wheat roll wrapped in brown paper and served with the usual puddle of olive oil. The roll, which is said to come from Bistro Bakery, looks better than it tastes, the olive oil is ordinary, but there is redemption: a full head of roasted garlic. Now’s a good time to order a glass of Gladium Crianza tempranillo from the gently priced wine list; it’s light-bodied enough to go with most appetizers. (We’d also like to see some Spanish whites, however.) Note that wines by the glass are $3 off during the happy hour that ends at 7 p.m., making a glass of Ferrari-Carano chardonnay a mere $6.

Here’s where things get trickier, however. The appetizer list runs the gamut, from a pristine plate of Marcona almonds with Greek olives, to an opulent eggplant Josephine with shrimp, mozzarella, sauce diablo, hollandaise, and an antipasto plate that needs to be shared. There is the obligatory calamari, though at least with a lemon aioli. I wanted more than almonds, less than lush eggplant, and had enough of calamari for a while, so I looked to the specials board. As many of the menu’s dishes are reflections of the owner’s preferences and travels (the paella, for example), this is where chef Sean Fletcher is allowed to experiment. Lamb meatballs to the rescue.

He did them well. The orbs were not over-handled, allowing the lamb to come through. There was a deft pan sauce, some chimichurri to add a little herbal zing, and a tangle of fried onion strings for crunch and color contrast. The chef’s second experiment tried even harder for invention but ended in confusion. The seared diver scallops could have been firmer, yet their flavor was fresh and clean. But, cautionary tale here, putting pineapple, chorizo, and saffron together did not a satisfying sauce make. There were more onions, in ring form this time, but the best part of the dish was its side of simply sautéed sugar snap peas; they were perfection.

The standard menu mains are of the hit-parade variety: a couple of pastas, an Atlantic salmon, steak Diane, charbroiled lamb chops … nothing to excite the thrill-seeking foodist upfront, though I’m inclined to return to try the bronzini El Greco with lemon oil and roasted garlic. Why? During Culinaria’s Restaurant week, Chef Fletcher did another off-menu special of sautéed escolar. This fish can be oily to the point of gastric distress, but he executed the dish flawlessly, bedding the filet on the often-appearing chimichurri, napping it with brown butter and capers, and strewing a few onion strings (again) on top. The strings were superfluous in almost every way, but the rest suggest the chef is developing a way with seafood. It’s only fair, then, that he should be given better serving pieces to work with. The fish looked seriously constrained in a bowl far from big enough.

I didn’t think anybody was still doing raspberry vinaigrette (it appears here on the house salad); a restraining order is hereby issued. Spinach with warm bacon vinaigrette is equally of another generation, and it’s not yet time for a revival. The simple citrus dressing on the Restaurant Week salad of trimmed and sliced oranges with almonds and olives (I’m beginning to think the kitchen needs a few more fall-back ingredients along with bigger plates) worked just fine. An equally restrained dessert, the family-recipe pistachio loaf cake served with chopped pistachios and a satisfyingly dense crema, was refreshingly straightforward. Of another generation or not, it deserves to become a standard. I would be surprised to find that Bella’s rendition of the warhorse tiramisu rose to the same level — though, come to think of it, I was surprised by just about everything else on (well, mostly off) the menu. •

Bella On the River

The Skinny
A cleaned-up cave on the River Walk, Bella does Continental favorites, but does them well.