Falling in love with Anne Hathaway 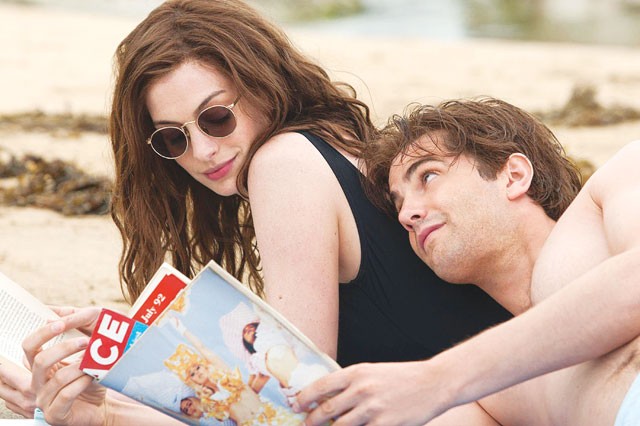 Based on the opening montage, one might imagine that the film will rise or fall based on the viewer’s ability to stomach a Sad Hathaway performance. She’s a divisive one, that. But should a reader who finds the actress annoying, ingratiating, whiny — for reasons inexplicable or specific — be precluded from enjoying this film?

Not necessarily. If one dislikes romantic and sentimental, then yes, by all means, avoid One Day. I was transformed by Hathaway’s characterization of Emma, however, one half of One Day’s dynamic, will-they-won’t-they duo. Indeed, a very significant shift has been made: I no longer belong to the aforementioned (at least more often than not) “ingratiating” camp; I now believe the actress was simply born in the wrong country. She should always be British. (Does this work the opposite way? Would Hugh Grant be equally irritating if he had an American accent? Perhaps this is not the best example... ) Maybe Hathaway should just always be directed by Scherfig, a lady Dane, or Jonathan Demme (Rachel Getting Married).

In One Day, adapted for the screen by David Nicholls from his book, the bespectacled Emma and charismatic Dexter (Jim Sturgess, shades of a young Kyle MacLachlan with less chin) are thrown together in the wee hours of the morning on the day following their university graduation. It is July 15, 1988. After a near shag — “Don’t cock this up,” Emma says to herself as she readies — the two merely snuggle in Emma’s bed until, well, until they wake up later the same day. They share a quick and sarcastic sense of wit, but otherwise, almost nothing. Nevertheless, they strike up a fast just-friends relationship and agree to always speak on the 15th of July — St. Swithin’s Day, their buddy anniversary of sorts, and the “one day” that gives the narrative its title.

Dexter is an overconfident, designer-label-loving child of privilege who spends his first few post-grad years travelling the world. Self-doubting, florid-feminine-dress-wearing Emma moves into a “horrible flat,” with a roommate, and the closest she comes to world travel is working at a Mexican restaurant.

Of course, in a Scherfig movie, even humble surroundings look pretty appealing, here thanks to cinematographer Benoît Delhomme and an art department comprised of Denis Schnegg, Su Whitaker, and Katrina Dunn. The colors and textures, even of the floral powder-blue wallpaper in the horrible flat, are saturated and attractive. As with An Education, One Day remains just this side of too lit. (For other examples, see every Ron Howard-directed movie.)

Though Hathaway and Sturgess have a compellingly natural and easy way with one another, one that authentically reads as immediate and innate chemistry, it’s difficult to understand why Dexter, who always seems to be doing something exciting, desires Emma’s friendship — at first.

She crushed on him from afar in college, so it serves the ego, and there could be the draw of seeing how the other half lives. Likable as Hathaway may be, Emma is living a small and uninteresting life, we find, checking in on her for the first few St. Swithin’s after ’88, and it isn’t for several years into this 20-or-so-odd-year-long chronicle that we have any sense of exactly what Emma is passionate about.

But as the characters cook, as Emma’s star gradually ascends and Dexter’s rapidly descends, the allure of the female lead is coaxed out — her talent, her goodness — and her increasing confidence is most agreeable. Meanwhile, Dex becomes the host of an MTV-ish show called Late Night Lock-In and the question is, Why does Emma still bother with him?

Now, the film ends more times than Return of the King (bring tissue!), and Hathaway never seems to age while Sturgess is the victim of progressively bad gray hair-dye jobs. Blessedly, though, the filmmakers never take the period stuff too far — by which I mean the soundtrack isn’t a ceaseless Hits of the ’80s/’90s compilation. One Day is an endearing (if somewhat mushy) movie, its biggest surprise a potentially universally adorable Anne Hathaway. •