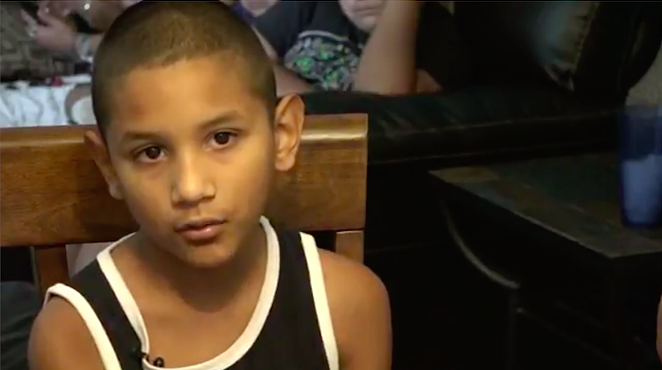 When San Antonio police officers crashed into the living room where 10-year-old Devin Valdez was sitting last Thursday, dragged his naked grandfather out of the shower and began beating him, Valdez asked them to stop.

"They took me to the room, and put me in handcuffs and had a gun pointed to my head," Valdez told Kens5.

SAPD raided the home with the intent to find the grandfather, Felix Lopez, who has a criminal history. The raid was part of several search warrants that the SAPD carried out southwest of downtown during a narcotic and gang investigation last week.

The family is accusing SAPD of excessive force, but has not yet filed an official complaint. They say the incident was not something the child will forget anytime soon. "He was able to see everything they did to him," Delia Mendoza, the child's grandmother told Kens5.

Mendoza said that Lopez was left with a broken cheekbone, two broken arms and at risk of losing an eye. She said the police ransacked her home and that they shot and killed her dog, which was tied up in the backyard.

The police said they found drugs – which officials said they think were Lopez's – in Mendoza's backyard. In response to the accusations of excessive force, Sergeant Jesse Salame told Kens5 that raids can be unpredictable and dangerous for police officers.

Excessive force accusations, especially those against people of color, are not new to the department. In 2016, the Express–News revealed that although SAPD officers don't typically rely on using force during police interactions, when they do it's most frequently used against minorities. Between 2010 to 2015, SAPD officers used force most disproportionately on Hispanic people at a rate of 62 percent.

Two months ago, the SAPD was accused of using excessive force when attempting to break up a fight between two men at a quinceañera. In the parking lot of the event, an officer punched a 14-year-old girl so hard that she was diagnosed with a mild traumatic brain injury and trauma to her face and neck muscles. The officer claimed the girl had punched him first.

The 14-year-old girl's family lawyer, Artessia House, said in May that excessive force is part of a pattern that the city needs to take seriously.