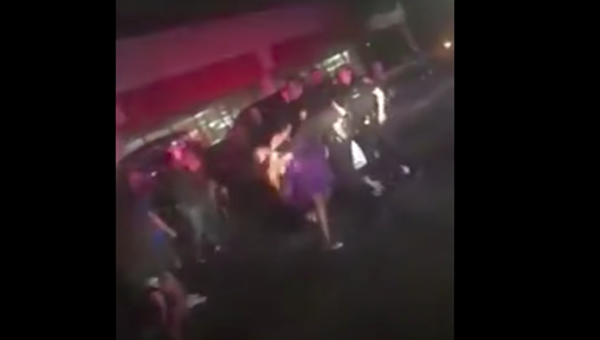 When police responded to a fight that erupted at a northeast side quinceañera Saturday, April Johnson says she saw a San Antonio Police Department officer punch her 14-year-old daughter so hard that when a doctor examined her two days later she was diagnosed with a mild traumatic brain injury and trauma to her face and neck muscles.

A grainy video clip of the incident, which appears to show the officer striking the girl, spread across social media this past weekend, angering local police reform activists who call it a clear-cut case of police brutality and unnecessary use of force. Artessia House, an attorney representing the family who says she plans to file a federal civil rights lawsuit against the department and the officer involved, told the Current on Wednesday, "That officer MMA-style punched this girl as if she was a grown man."


Johnson says she and her daughter (who, at the family's request, we're not identifying) had been attending the quinceañera of a close friend Saturday night at the Crown Palace Event Center when a fight broke out between two men. She says police started to arrive as people attending the party poured out of the event center and the frenzy migrated to the parking lot. The atmosphere was still tense, she says, once police started questioning people. Johnson says her daughter was "trying to calm people down, trying to be a peacemaker."

Johnson says she's the one seen in the video wearing a white dress and who can be heard yelling "don't talk to her like that" before an officer swings an arm and the girl's head jerks backward. Johnson's the one who keeps yelling "no!" and "let her go!" as officers drag the girl out of view.

"I was trying to run and get my daughter, to make sure they didn't hurt her," she told the Current. "Instead, I actually got choked and thrown to the ground."

SAPD officials haven't responded to our requests for comment, but Johnson claims the officer (who the department hasn't yet identified) shown on video striking the girl actually admitted to punching her. His justification: she hit him first.

Johnson says she was detained in the back of a police cruiser immediately after the altercation, but was released once her daughter was arrested and taken to the county juvenile lockup, where the girl would remain until after her initial Monday court hearing on the felony charge of assaulting a public servant. (Johnson's angry her daughter couldn't get medical attention until after her release from lockup.)

"I walked up, and the police officer was talking, saying he hit my daughter because she punched him in the face," Johnson told the Current. "He said, 'Yeah, I punched her back. I didn't punch her as hard as I wanted to, but I did hit her back.'"

House, the family's attorney, denies the girl hit anyone that night, let alone a cop. Her family says she's an honor-roll student who has never been in trouble with police. She's now on bond and has to abide by a 7 p.m. curfew.

"We adamantly deny that she hit that officer," House said. "But even if you thought she did, why not just restrain this child? There were more than enough officers standing around her to do that." House says that even if you believe the girl swung at a cop, it's still "an absolute civil rights violation and an unnecessary, disproportionate use of force."

House, who's also the attorney representing the family of a man shot and killed by an SAPD officer who mistook the man's cell phone for a gun last year, argues that what happened Saturday night is part of a pattern of unnecessary force the city refuses to take seriously. House was sharply critical of Mayor Ivy Taylor's response to the video (which was, basically: yes, it's hard to watch, but let's wait and see what the body cam footage shows), and insists city efforts to address community concerns of heavy-handed policing have been anemic at best (efforts we wrote about in a feature earlier this year).

“I’ve personally heard Mayor Taylor say San Antonio is not Ferguson, Missouri, basically denying that we have a police misconduct issue here," House told us. "It's like an addict dealing with an addiction — you can't solve the problem until you admit you have one."

The problem underscored by this weekend's video, House says, is that if a San Antonio cop thinks a 14-year-old girl swung at him, he'll punch right back.