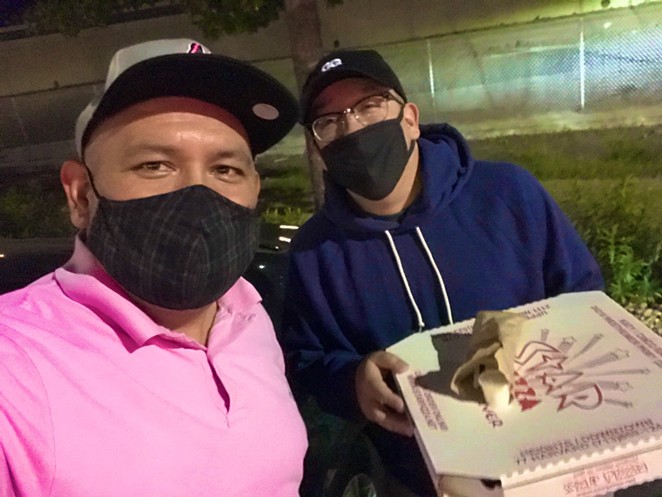 Some creators have fans. Others have stans.

Count San Antonio's Shea Serrano among the latter. A Twitter follower of the New York Times bestselling author drove 200 miles from Houston to deliver a pizza to his house over the weekend.

Here's how it went down.

Serrano, who lived in Houston before relocating back to his hometown of San Antonio, tweeted that he was missing that city's food scene. A fan named Rodrigo Bravo replied that he happed to be driving to the Alamo City from Houston and offered to pick up whatever the Basketball (and Other Things) author wanted.


"go on and stop at Star Pizza off 59 — get the starburst pizza for me — deep dish — wheat crust — no beef — thanks," Serrano tweeted back, throwing in a "LOL" to signify that he was just joking.

go on and stop at Star Pizza off 59 — get the starburst pizza for me — deep dish — wheat crust — no beef — thanks lol https://t.co/EcksJzmeZT


Turns out, it was anything but a joke to Bravo.

After a warning tweet partway through his journey, he showed up later that evening at Serrano's door with the requested Starburst pie.

he fucking really did it lol


From the tweet thread, it's clear Bravo believes one good turn deserves another. He explained that he was honored to make the delivery after Serrano offered up proceeds from a recent pay-if-you-want online book to pay senior-year tuition for two undocumented UTSA students.

Man, I tell you... this is why I would deliver a pizza to this man anytime. I’m literally in tears, my man Shea doing it AGAIN. A true legend. https://t.co/yR3ld2ZzfX


"Man, I tell you... this is why I would deliver a pizza to this man anytime," Bravo tweeted. "I’m literally in tears, my man Shea doing it AGAIN. A true legend."
Stay on top of San Antonio news and views. Sign up for our Weekly Headlines Newsletter.