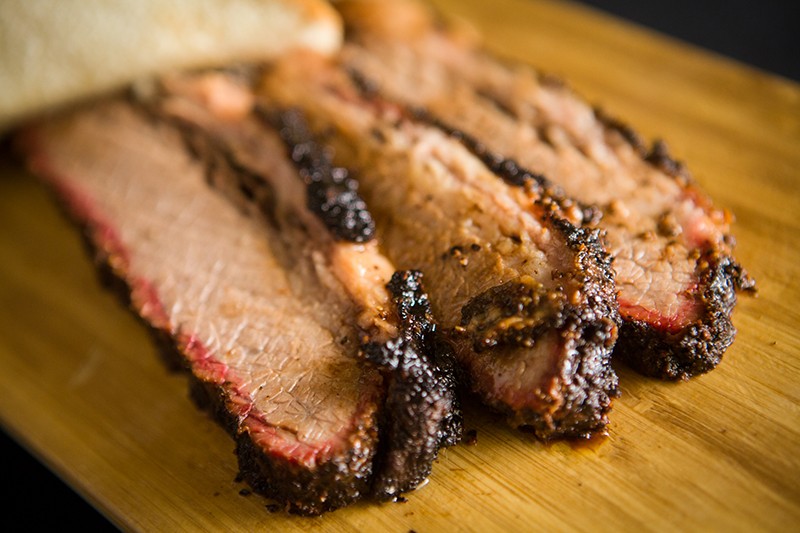 It should come as no surprise to most frequent readers that I'm not entirely a fan of Loopland. I blame it on the driving conditions as luxury SUVs whizz by my struggling compact and I never have a clue where I'm going (I accidentally parked at Cornerstone while trying to find my bearings).

On my last visit to Smoke during mid-day traffic — turns out there is such a thing in those parts — my lunch partner and I were met with a sweeping crew on 281 North, a work crew tweaking signage on Sonterra Boulevard and later a flashing red light as we tried making our way back to home base.

Still. None of that possible traffic nonsense should deter anyone from visiting Smoke and taking in the barbecue. If anything, the great 'cue helped keep my road rage at bay while on our drive back.

Found inside the former home of gone-too-soon Auden's Kitchen, Smoke retained the skeleton of its predecessors, but scrubbed away any notion that two other restaurants had occupied the space. In contrast, Zoka, the Spanish-tinged eatery that filled the suite previously, didn't bother replacing any dishware, which made this diner miss Auden's. Smoke, helmed by chef Brian West and owned by Adrian Martinez of China Garden fame, takes all of what we know — and think we know — about Stone Oak eateries and flips it on its head. What's left is a fun, mostly casual restaurant that uses its digs expertly.

Light and dark brown hues are scattered throughout. The burnt orange walls are filled with artistic pork and beef diagrams so barbecue students can learn where their cuts of brisket come from and cowhides are sprinkled along the restaurant's entrance. Metal shelves, filled with leather-bound books, cookbooks, canisters and extra firewood, carve out dining room nooks within the restaurant. It's classy without being pretentious, casual without feeling too laidback — it makes you want to sit around and lounge (don't worry, they have leather couches for that).

It's worth noting that Smoke's servers carry around mini tablets for placing orders, which makes them even more efficient. Our first visit in May for a late dinner was met with a too-good breadbasket with assorted buns. If there's poutine on any menu, it's hard for me to not order it. Smoke's version — topped with brisket, chipotle aioli and a fried egg — is further upgraded with the use of crisp tater tots. Put this down as a must-have, while I put it on my best things I've eaten so far in my 2015 list.

My dinner dates each had the Texas fried chicken with lard biscuit, mashed potatoes, slaw and a rosemary honey. While the chicken was crisp and freshly fried, it lacked certain oomph. On my end, the "Sexy BBQ Meatloaf" was a succulent mix of brisket and bratwurst, topped with a peppy tomato sauce. I could have done without the pickled okra, which was still on the slimy side of things but nonetheless was another hit for West and co.

On the lunch end of our review, it's hard not to go overboard at Smoke. It probably helps that whole pig heads are available under "Feasts" on the menu, broken down into hog head, brisket, turkey and barnyard. After putting in our order — yes, we had more of the poutine — our table was filled with boards and tiny cast iron skillets atop wood slabs. Brisket (served fat and lean) at $12 for a half-pound was moist and thankfully lacked that manufactured "liquid smoke" taste; the turkey was thick and mouth-watering (we fought for leftovers); the pulled pork sandwiched between house-baked Hawaiian rolls was a delight — not too sweet, distinctly smoked and tender.

Though most of the meat didn't need the assist of the six — count 'em — house sauces, you have to hand it to West for creating a playful, cross-cultural lineup, all expertly explained by our server, Terri.

From a signature barbecue sauce to a thick chimichurri and a zippy Spanish Fly green sauce, I'll put that shit on everything.