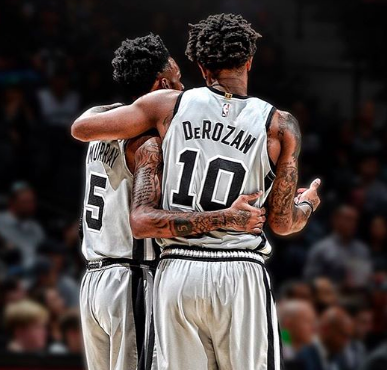 Discoveries made during online sleuthing have Spurs fans worried the team's roster will soon change.

While fans have been heartbroken about string of losses San Antonio has faced as of late, many are now in panic mode after noticing DeMar DeRozan has cleared his Instagram of all posts.

Why's this relevant? He also cleared his posts when the Toronto Raptors traded him to the Spurs.

And DeRozan isn't the only one fans are worried about. Ever-loyal Dejounte Murray, who signed a contract extension just last month, also has unfollowed the team on Instagram. As of Wednesday morning, the Spurs account is still following both players.

To make the case for pending trades even stronger, the longest-tenured Spur currently on the team, Patty Mills, has unfollowed both DeRozan and Murray on Instagram.

All the moving pieces have Spurs fans thinking trades are on the horizon.

Dejounte unfollowed the Spurs on Instagram. Demar deleted all of his posts. Patty unfollowed both of them. What. is. up.

The Spurs are crumbling in front of our eyes. pic.twitter.com/WnaJkdfUcX


For now, though, fans should recognize this is all speculation. We'll just have to wait and see whether the franchise is making big changes.