Far From a Fad, Cabrito’s Lasting Legacy in SA 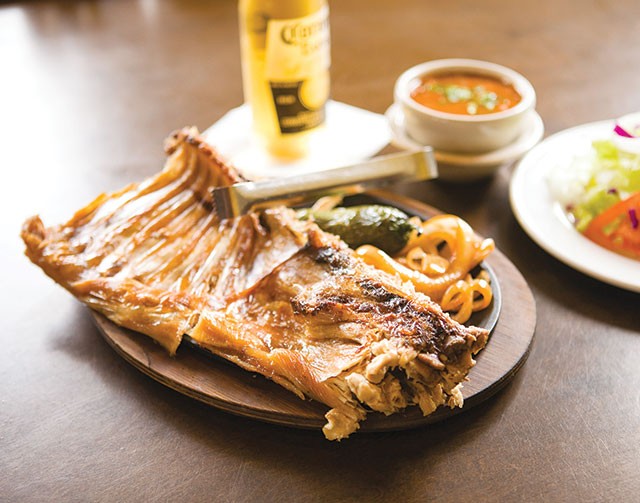 Little-known (and probably not all that interesting) factoid: I grew up with goats. Not in a cohabiting in the barn sense (except when tasked with milking, a chore I was at pains to keep hidden from classmates), but with goat’s milk every day. And, as these critters were as much pets as providers of leche, we never considered eating them. Somehow, the kids just miraculously disappeared at a certain age. It wasn’t until many years later that I learned they didn’t go to gambol on someone else’s greensward.

So despite goat’s status as the world’s most-eaten meat, I can’t remember ever having had it until arriving in San Antonio—most likely at either Mi Tierra or Los Barrios. It’s a mainstay on both menus to this day, but the connection to Los Barrios is in many ways the most direct due to El Rey del Cabrito, Rogelio Treviño. I interviewed the silver-haired Sr. Trevino (whose son Roland and daughter-in-law Diana Barrios Treviño are of the Los Barrios empire) in 2002 while doing an article for Texas Highways. He recounted how his father, Catarino Treviño, had sold meat door-to-door in Monterrey before coming to San Antonio with his family in 1927. Quickly picking up where he had left off, Catarino founded La Reforma Meat Market on South Laredo; Rogelio (who passed away five years ago in his late 80s) began working there at the age of seven, helping tend the steamer that held cow, sheep and goat heads for barbacoa. “My father introduced cabrito here,” he said, and so it became the main product of United Meat Company, the wholesale arm of La Reforma Rogelio later founded and ran for decades. “We used to [process] 200 or 300 goats a week,” he recalled. (Another factoid: in 1944, cabrito sold for 30 cents a pound.)

As the third generation in his family to carry on the profession, Roland Treviño says, “I’ve been a butcher all my life, but I’m astonished by the recent change in goat’s popularity—and that 10 years ago it was half the price.” We can assign some of that popularity to the opening of a couple of restaurants dedicated to presenting cabrito in its most basic norteño form—not baked or simmered, as has been the case here to date, but splayed, spitted and cooked over coals.

Johnny Hernandez got the jump on spitted goat, but only just barely, at El Machito in the Quarry. (See “Northern Mexico Makes its Way to the Quarry,” July 9.) The most recent arrival, direct from Monterrey where they have three outlets, is Los Cabriteros on Henderson Pass. As the name suggests, LC concentrates on cabrito—and in addition to goat quarters, goat tacos and their version of cabrito en salsa, one can also order cabecita (the whole head, “eyeballs, tongue and all,” said one waiter), fritanga (goat stewed in blood) and machitos. The machitos, consisting of interior parts stuffed into intestine and grilled, are way better than one might imagine, but newcomers to the party can be excused for not rushing to order them. There is no excuse for not picking, say, the paleta, or shoulder blade. Yes, it’s $27.99 but will serve at least two; it’s mild and tender; and it’s moist enough to eat without salsa—though you’ll want to try all three.

But the LC experience served to remind me that, courtesy of Rebecca Creek Farms (which supplies goat cheese to restaurants such as Biga), I had kid goat parts reposing in my own freezer where they were taking up valuable room that could have been put to use chilling gin, tequila and mezcal. A friend, who had recently purchased a Brinkman smoker, contributed her recipes for both brine and rub—and offered to do the smoking. If you have access to a smoker, or are willing to MacGyver a way to do it in a barrel or pit, you can use my recipe. If you’d rather have others do the cooking, you can find cabrito iterations across the city at El Siete Mares (3831 W Commerce); Erick’s Tacos (12715 Nacogdoches); Acenar (146 E Houston); El Jarro de Arturo (13421 San Pedro); curried goat at Jamaica Jamaica Cuisine (2011 Austin Hwy); Piedras Negras de Noche (1312 S Laredo); and Johnny’s Mexican (1808 N New Braunfels).