Far from border fare at Cascabel 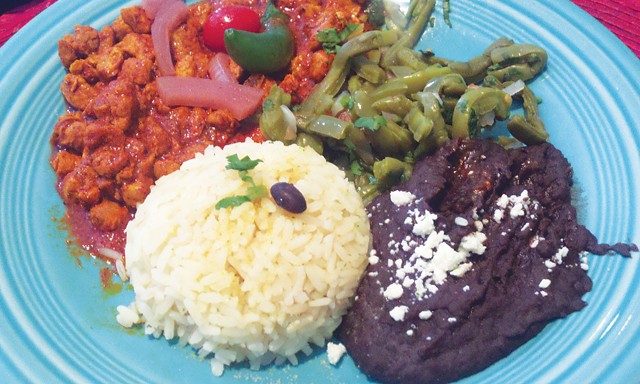 Tiny Cascabel on South St. Mary’s offers an intriguing alternative to taqueria fare, favoring recipes from southern Mexico and light touches like silver napkin rings that set it apart from the Tex-Mex crowd. I had intended to try their birria, a hearty meat stew that Cascabel makes from goat, but succumbed to another of my favorite dishes instead, cochinita pibil.

Cochinita is suckling pig, and in Quintana Roo in the Yucatan Peninsula the traditional dish is whole roast baby pig, marinated in bitter orange, then wrapped in a banana leaf and slow roasted in a fire pit. Pibil means buried, but I’m guessing Cascabel uses a kitchen oven and a baking bag to deliver their version of the famously tender pork. Because the marinade is sour, it tenderizes the meat before heat finishes the job, so pork shoulder substitutes well for the country piglet. I’m not sure what cut of pork was used, but it was soft enough to gum. Most important is achiote (annatto), which adds a distinctive color and flavor to the dish.

Cascabel steps right in with their wonderful salsa de achiote, topping the carnitas-sized morsels with a serrano chile, surrounded by mounds of white rice and black bean refritos. The corn tortillas are country-style too, not gorditas but fat and definitely handmade. Their two salsas, the green with tomatillos and the red made of chiles de arbol, were more than adequate, though the green salsa could have benefited from more complexity. The red salsa, however, was robust and happily not afflicted by tomatoes — just a bowl of liquid chiles, seedy, and with some extra, well, I don’t know what.

Upon asking I was told that the secret ingredients wouldn’t be secret if they were divulged. Which makes sense. But here’s a secret that you should figure out when you visit: There are no chips on the table, but if you drop some red and green salsa on the simple white rice, it sings like a canary.