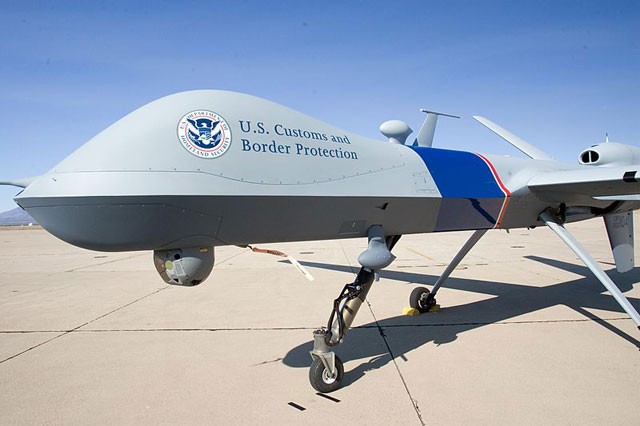 The spies are in town. Thousands of them, from those inside U.S. and foreign intelligence agencies to reps with major government security contractors like Boeing, Lockheed Martin, and Northrop-Grumman. They’re all swarming the halls of the Henry B. Gonzalez Convention Center this week for the industry’s annual trade conference known as GEOINT, shorthand for “Geospatial Intelligence.”

Less a gear show for James Bond types, with exploding pens, night-vision goggles, and miniature hidden cameras, this was a conference for those at the forefront the of high-tech marvels now used to fight wars, from thermal imaging and satellite mapping to data-mining and unmanned aerial drones.

Over the past five years, San Antonio has worked hard to foster a large national security footprint. With heavy lobbying by city and county officials, San Antonio in 2007 bagged the U.S. National Security Agency* itself — getting the granddaddy of national secrets to build its Cryptology Center here in town (read “The panopticon economy,” December 3, 2008). The massive complex now graces West Military Drive near Loop 410, a former Sony microchip plant turned hub for America’s top spy agency, employing some 1,500 workers, although details of what happens inside the shadowy data-mining complex, fenced in with barbwire, are largely opaque.

On Monday, Mayor Julian Castro helped kick off the conference, stacked with big-wigs from across the national security apparatus, by citing a summer Wall Street Journal piece touting San Antonio as a hub for the growing cyber-security industry. (He failed, however, to mention last month’s report from AVG Technologies naming San Antonio residents are the most likely victims of cyber crime attacks when compared to 35 other major metro areas.) Director of National Intelligence Jim Clapper spoke the same day about developing a “groundswell in academic circles, in colleges and universities” (places like San Antonio) to keep the cyber-intelligence field flush with new talent. Clapper was set to meet with Castro and local chamber of commerce reps shortly after his remarks on how to continue growing the cyber-intelligence industry here in town.

The focus of this week’s conference has been so-called geospatial intelligence, or using satellite and drone imagery, coupled with finely detailed mapping and charting, to assist troops in combat (“the eyes of the nation” was just one buzz phrase circulating throughout the conference). Conference-goers and high-profile speakers pointed to the most recent, major tactical success for geospatial intelligence — the tracking and killing of Osama bin Laden. Behind the podium, where speakers like Clapper and NSA director and head of Cyber Command Gen. Keith Alexander held forth, were colorful graphics of wires crisscrossing from unmanned aerial drones to the White House, along with the iconic Time Magazine cover marking bin Laden’s demise, his face X-ed out in red.

In reality, the large, flashy industry displays lining the aisles of the convention center are a byproduct of the decade-long ramp up in national security infrastructure post 9/11. Formed in 2005, the office of the Director of National Intelligence now watches over some 16 federal agencies, such as the CIA and FBI, that make up our nation’s now-sprawling intelligence community. And private intelligence contractors, including for-hire intelligence analysts, computer techs, and even spies, have reaped the benefits of that boom. A DNI report in 2007 acknowledged that private contractors had begun to form a “key part” of the nation’s overall intelligence workforce, highlighting concerns from then-CIA director Mike Hayden that his agency had become a “farm system for contractors.”

Earlier this year, DNI Director Clapper disclosed that the entire spy network spends around $80 billion annually. But the federal budget crunch could change that, Clapper acknowledged Monday. Clapper said his office had just handed in its “homework assignment,” the agency’s 2012 budget, to the White House, saying it “calls for cuts in the double-digit range, with a B [billions], over 10 years.”

“We’ve been rather luxuriously funded over the last 10 years,” he said, with intelligence agencies rapidly expanding by leaning on contractors. Painfully, Clapper said, new budget constraints mean the intelligence community will have to reduce its private contractor profile in the coming years.

“Not to drop a name, but I did mention to the president once, and he agreed, that this oncoming challenge of reducing our budget rationally is kind of the litmus test for the Office of the Director of National Intelligence,” Clapper said.

For many of those industries lining this convention center’s halls with displays touting their interior surveillance systems, biometrics systems, virtualized imagery processors, and thermal imaging systems that could mean a slow transition into “adjacent markets,” like local and state police, emergency responders, and border patrol.

One such operation, largely classified and available only to the military until this year, is Science Applications International Corporation’s system for seeing through walls. Its IBISS, or Integrated Building Interior Surveillance System, uses “ground-based and airborne through-wall radar sensors to reconstruct the interior structure and contents of a building” that can be displayed on any portable device — in the future, possibly even smartphones. According to Newsweek national security correspondent Eli Lake, the company’s currently shopping the tech to local police stations and fire departments, hoping to expand its footprint into other markets.

Coming soon to a police department near you? •