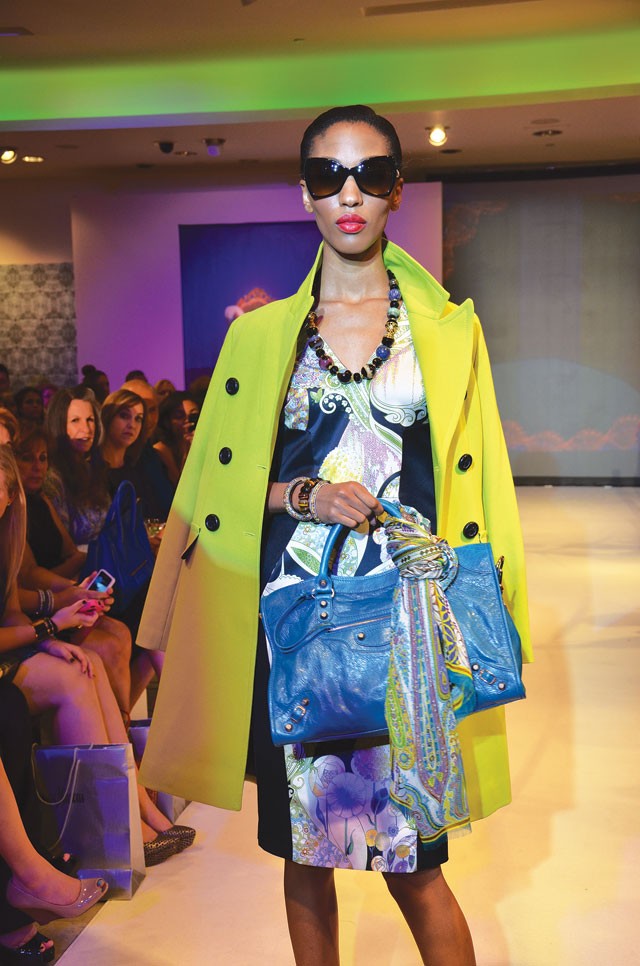 Did you know last Thursday, September 6, was Fashion's Night Out in San Antonio and around the world? Billed as the "hottest night in fashion" by industry mavens worldwide, Fashion's Night Out (aka FNO) was launched in 2009 by famed American Vogue editor Anna Wintour to improve flagging retail sales during the economic crisis. Since then, FNO has spawned events in 500 cities and over 19 countries worldwide. Besides Saks and Neiman's (where the two biggest parties were held), Blue Star Contemporary Art Center, in collaboration with Aquarius boutique, Macy's, and other local stores, hosted special events, discounts and entertainment for their style-savvy customers.

I began the night at Saks, where I was welcomed by a choice of light bites courtesy of local restaurants dishing up Italian specialties, cupcakes, Mexican dishes, and other delicacies heartily washed down with a sweet vodka martini, aptly named Sakstini. While ostensibly there to peruse the two floors of nibbles, clothes, and makeup treats, patrons hit the scene to see and be seen. Showing off the latest fall styles were models striking silent poses on platforms, but they were more than happy to break character to enquire if, you too, might want what they were wearing.

But the party really got started at Neiman's, which, one could say, has this event down-pat. Already well-versed in fashion and upscale event collaborations, they pulled out all the stops, offering up two sexy, on-trend fashion shows during the night, with a fashion hunt, champagne, wine, foodie delights, and more. The party definitely ends here, or so it did for me. People were dressed to impress, and wore all the trends (regrettably, sometimes all at once), but you can't knock them for it. They tried, and that's good enough in my book for San Antonio style wannabes (you know who you are).

Sure, I could have been coaxed to trotter-out on my Louboutins to the other shops of La Cantera also hosting FNO events, but why bother when all the real action was at the big stores? Ah — if only there were a monorail between North Star and La Cantera. Julián Castro — are you listening?