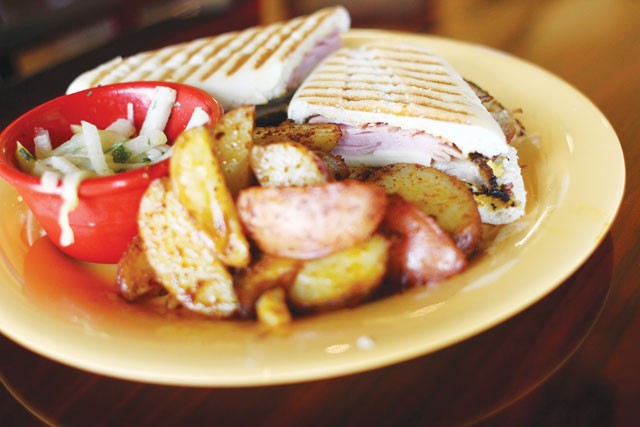 Living downtown, I generally eat, drink, work, play within a small three-mile radius, and I have yet to really exhaust all the options at my fingertips within that rich, eclectic bubble. The 1604 rim, the edges of suburbia, are still a foreign land to which I travel rarely, and even somewhat cautiously when it comes to food.

But it’s out here, among the wilds of strip malls, cul-de-sacs, and endless lines of chain restaurants that I found a gem in the heart of the mundane. The Calypso Rotisserie, which opened late last month, sits on San Antonio’s outer edge, near the 1604/Bandera interchange. Owned and operated by Pierre Kranzle, who last made a splash with downtown’s Azuca, Calypso pegs itself a health-conscious Caribbean-infused lunch spot, with spice-crusted chicken and pork spinning behind the counter. Kranzle says he’s had a taste for the Caribbean since a second honeymoon with the wife in the Caymans years ago, inspiring dishes like pineapple coconut rice and caramelized plantains — far from the typical lunch fare, especially out here.

When I grabbed lunch recently, I opted for the Cuban sandwich, a panini with Swiss cheese, spicy mustard, pulled pork, and ham. Sprucing up Calypso’s health-conscious bona fides, Kranzle says the restaurant doesn’t ever use fryers — they don’t even have one on premises. The seasoned potato wedges and plantains that accompanied my lunch were both baked, not fried, and honestly tasted better for it.

But these are shark-infested waters out here, long-since handed over to the likes of Olive Gardens, Applebees, and Red Lobsters. While Calypso stands apart because it’s good, unique, cheap, and fast, it doesn’t look like much from the outside, blending into a sea of the typical strip-mall fare.

Distance may, for a while, keep us apart, Calypso. But the next time I venture outside my downtown bubble into the suburban wilderness, I’ll make sure to find you for lunch. I know that, given my surroundings, you’ll likely be the best thing around.