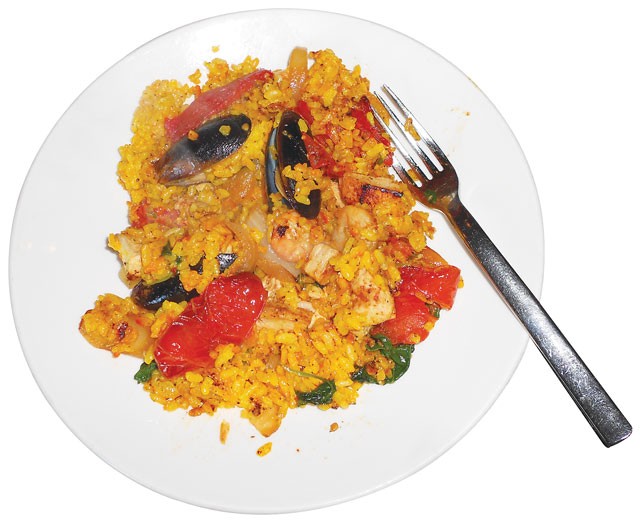 Citrus, inside the Hotel Valencia on Houston Street downtown, has a great bargain lunch — appetizer, soup, salad, individually tailored paella, with agua fresca or sangria — all for $9.95 on weekdays. Sure, but where do you park downtown, you ask? The hotel throws in complimentary valet parking.

After entering the dark, somewhat claustrophobic foyer, take off your shades and climb the stairs to the second level, where Citrus maintains seating for about 50 at wooden tables and banquettes under a wooden barrel vault. Additional tables under sun umbrellas overlook the River Walk. It was only about half full on the occasions we ate there, more women than men, and most in professional downtown attire. Apparently tourists haven’t seeped into this spot yet.

Seating is efficient and service — the non-buffet part — is pleasant and prompt. Almost everyone we observed chose the paella buffet, but Citrus does have a full luncheon menu of salads, sandwiches, and entrees for $10 to $18. At the buffet, there is usually an appetizer like chicken skewers with satay, a choice of salads, and a soup. Salads I’ve seen there have included pasta with bacon, Caesar, and tangy Asian julienned vegetables with miniature pork dumplings, which brought me back for a second round. Field greens with a couple of dressing choices are always available. The soups can be heavy; I couldn’t get through much of the potato with Gorgonzola, but the corn chowder was really flavorful. A beef broth with whole mushrooms and red pepper flakes was a definite winner.

But the pièce de résistance, the paella, makes the whole trip worthwhile. Paella, derived from a Catalan word for pan, is common throughout Spain, with the main ingredients usually shellfish, chicken, and chorizo over a bed of saffron rice done to crispness. In areas like Galicia, there’s more seafood, in Rioja and Castilla y Leon, you’ll likely see more pork. At Citrus you choose your ratio of shrimp, mussels, chicken, pork carnitas, and sausage. Then select from the veggies: roasted peppers, caramelized onions, mushrooms, artichokes, olives, dried tomatoes, and spinach. Or have them all. And don’t decline the garlic. The paella is really a meal in itself.

The sangria is typical, but the agua frescas are a treat, especially the cantaloupe. And don’t worry about dessert; you won’t have room.