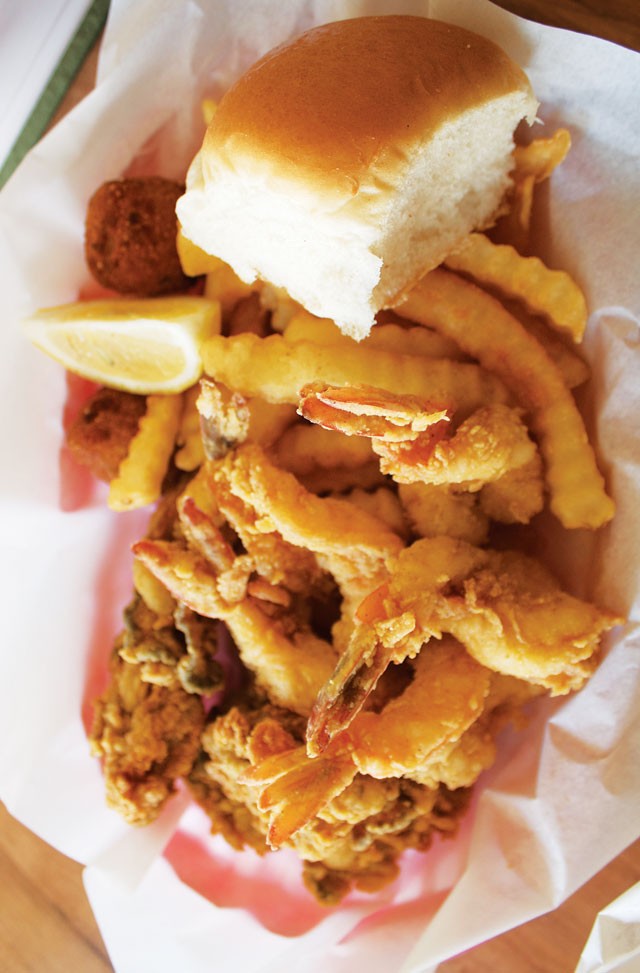 Don't bother looking for the name "Fishland" in your quest to find Fishland Fish Market on Walzem Road near Rackspace; it's nowhere to be found inside or outside the building. Keep your eyes peeled instead for "Fish Market," short and sweet. (Fish Market has just moved a couple of doors to the east, but the same lack of ID prevails.) For that matter, the former market inside has been reduced to an empty display case and a sign suggesting some fish might be available. The first-time diner might be excused for feeling a tad confused.

The move means that there is more seating… but the time between placing one's order at the counter and hearing the corresponding number called still can make it seem the fish aren't biting this particular day. (The kitchen does take phone-in orders, however.) But a successful fisherman needs patience, and patience will be rewarded.

The reward will come in the form of a lunch plate of drum fillets, four of them fried, as menus are wont to say, "to perfection." In this case it's true: the coating is crisp and light, and the fish is flaky, delicate, and moist, without any of the muddiness that often mars tilapia and catfish — which are also available, along with whiting, sole, and (sometimes) snapper. The house tartar sauce is just good enough, the vinegary hot sauce even better.

Combo dinners can also be had at lunch, and the oysters sharing a plate with shrimp provided another epiphany: unlike the usual specimens in such an order, these were still identifiable, of reasonable size, actually tasted like briny oyster, and weren't encased in a coating nearly as resistant as the original shell. The jumbo black tiger shrimp were good, but merely that; they might have used a little less time in the fryer. Same goes for tiny calamari rings; they're mostly coating.

A simple romaine salad is the accompaniment to many plates, as are hushpuppies (over-fried but well-flavored) and fries which can be ignored. A side of coleslaw might lighten fried-things guilt; the macaroni salad, not so much. Chicken wings and nuggets are also available.