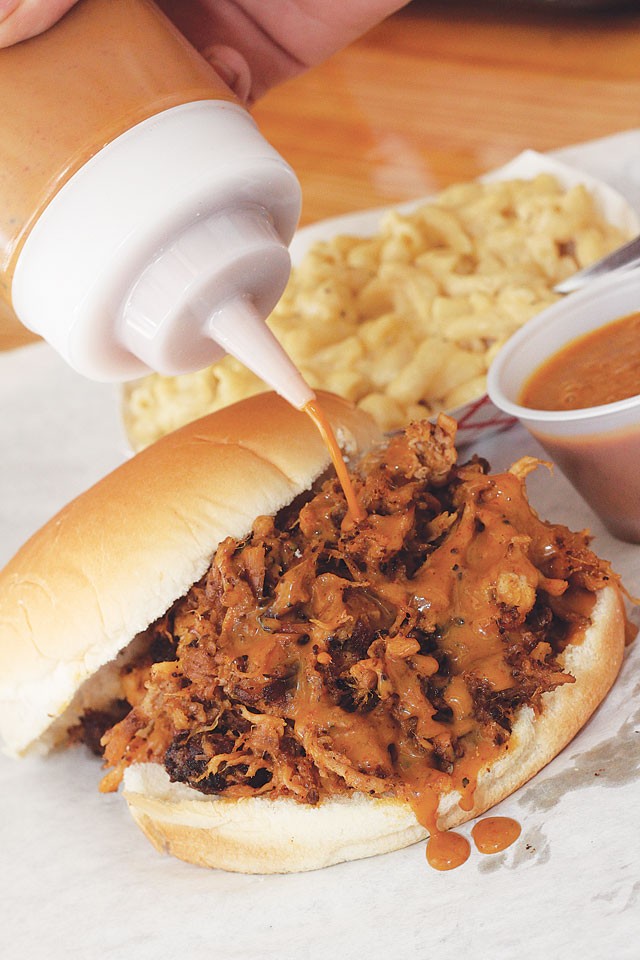 Downtown barbecue is a suspicious concept. Where, we ask, is there a place for a proper, smoke-belching pit, a prodigious pile of oak, or other acceptable fuel? The good folks at Meat Market Barbecue, recently installed in a handsome historic building just off Main Plaza (and right across from a Bill Miller’s outlet, most of which conspicuously lack the above attributes), claim that they smoke all of their meats right there at night, either over mesquite or hickory; second-hand smoke, in this case, ought to be a boon to nocturnal passers-by. The stuff being smoked first-hand, however, doesn’t justify its rick-a-day habit.

The cashier, who is also the baker, is responsible for our favorite item at MMB — the pecan pie. She says she uses “pure cane syrup” in a process that takes her four hours, and the result is a pie with a filo-flaky crust, lots of toasty pecans, and a filling that looks as smoke-darkened as any of the meats. And if the potato salad is a little too chunky-crisp, the pinto beans, rich with bacon, tomato, onion, and cilantro, are a work of art.

There are three distinct sauces on the long, communal tables: Carolina (sweet-tart); Kansas City (sweet-fruity); and Texas (spicy-peppery). We haven’t tasted the Carolina product in either of the namesake Southern states — and wouldn’t go out of our way to do so if MMB’s rendition is typical of type. But oddly enough, it did seem to work with they salty-greasy pulled pork — which we also wouldn’t pay any heed to in its unadorned state. The KC version we didn’t much like when in KC and didn’t find anything here that seemed to require it.

We did, however, kinda like the Texas version. It much improved an order of mesquite-smoked fatty brisket that tasted OK but lacked the conviction of a low-and-slow crusty exterior and that rosy ring that indicates good, smoky penetration. The lean, St. Louis-style ribs get the allegedly more subtle hickory treatment, but the result is, if anything, more acridly smoky. We generally prefer our “Q” without sauce; here it’s almost a necessity.

A “rick,” by the way, is a variable measure of cut firewood that is 4 feet by 8 feet on its stacked face by whatever the length of the individual pieces. Some day you might need to know.