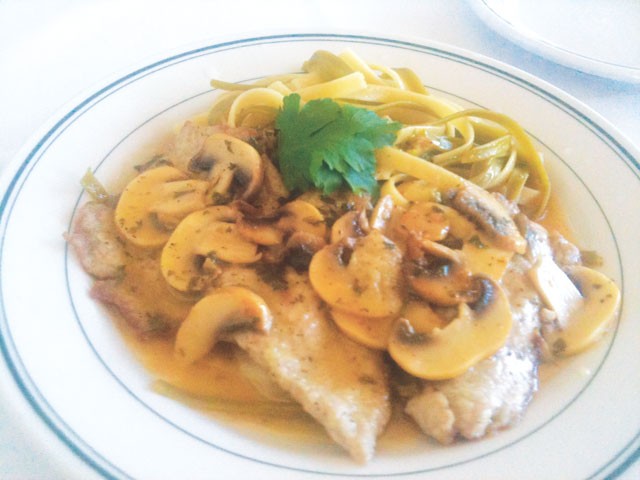 There’s a sliding scale for any kind of review. You know How to Lose a Guy in 10 Days is a bad movie, but it can be nice on a lazy Sunday. The Black Eyed Peas aren’t making ground-breaking music, but it makes a great jogging soundtrack. Some things are empirically terrible, but have a place for some people. Mesón has a place — with grandparents (or those who equate European cooking with heavy, oily food) when they want a fancy night out.

Mesón’s décor even reminds me of my grandmother’s house: ornate embroidered chairs, dark wood furniture, and crisp white linens. If only the food was as well-thought-out as the interior design. Lunch started with the baked artichoke hearts topped with cheese. The sauce quickly separated, leaving cheese globules floating in oil. The artichoke hearts themselves were fine, but hard to appreciate under all the fat. The cream of asparagus soup tasted mostly of dairy, with a hint of asparagus. The French onion soup was better, although it was too hot to eat for 15 minutes. The broth was sufficiently meaty, laden with bread and cheese.

I thought things might improve with the lunch specials. Lighten up, perhaps, and show a bit of depth. The veal piccata with pasta wasn’t breaded too heavily, but tasted mostly of lemons. The pasta has no sauce on it. I guess diners are meant to use all of the leftover sauces to dress their own pasta. Chicken Marco Polo, a creation of the owner, was breaded, stuffed with broccoli, and topped with cream sauce: a bit like chicken cordon bleu, except without the saltiness of cured meats to cut through the richness of dairy.

The problem is balance of flavor — everything on the menu is cheesy, or oily, or meaty, but nothing else. One-note dishes lack sophistication and finesse, and tend to appeal to people who don’t want their palates challenged. I’m not one of those people.