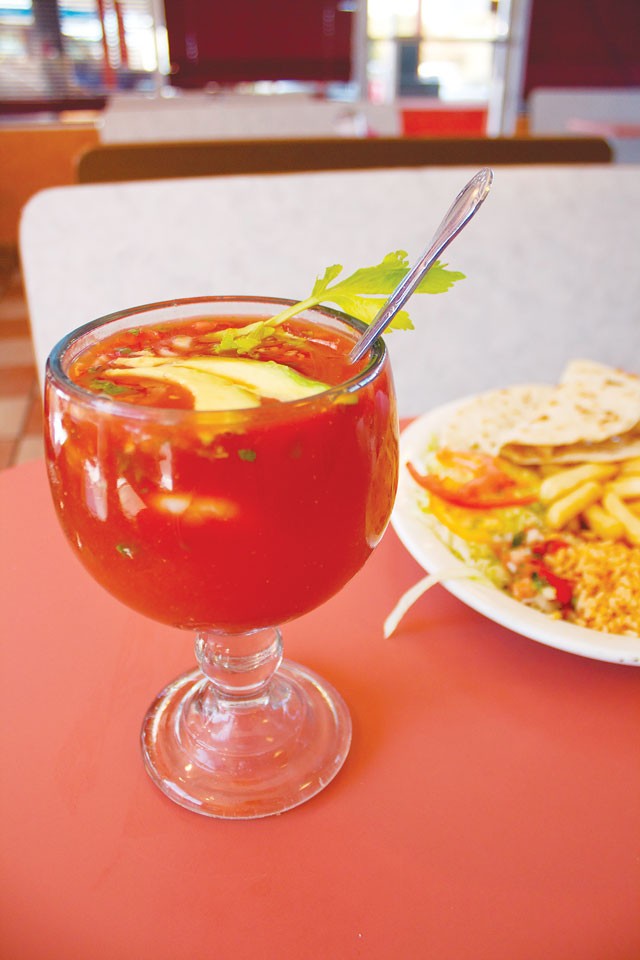 Go ahead, hazard a guess: how many taquerias in town include Jalisco in the name — either by direct reference to the Mexican state or indirectly through one of its major cities? (A more specific subset appropriates the word tapatio, a term for someone born in Guadalajara.) We don’t have a clue, by the way, but expect that the number is as substantial as a No. 12 Plato Jaliscience at one of the four Taqueria Vallarta (“Specializing in Jalisco Mexican Food”) outlets in town. We probably never would have tried any of them if not for the specific recommendation of a friend who had lived in Jalisco. Broadway next to Hsiu Yu, she said. The seafood.

Despite the coastal implication of the name, seafood is far from the major emphasis at the Broadway TV; the usual carnes asadas, fajitas, and even a Jalisco burrito abound. We nevertheless recommend that you head right for the shrimp cocktail. Even the small one, brimming with camarones and avocado in a soupy tomato sauce that’s light and not too sweet, is plenty for two to share as a starter. It will also set you up for more shrimp in the form of quesadillas. Assuming you elect the corn tortilla version (and you should), the quesadillas de camaron will arrive double-wrapped and oozing with melty Monterey jack. The abundant grilled shrimp are peppery, but they will not be diminished by adding a little Valentina hot sauce. Toss in some of the plate’s mild pico de gallo, too. Perfecto. TV’s rice is actually worth eating; the fries that accompany the quesadillas are not. No surprise there.

Wanting to mix a little tierra with the mar, we also tried a torta. At $4.25 it was undeniably generous, garnished with avocado and served in a toasted “French loaf.” The breaded milanesa we opted for was also well-seasoned but fried beyond all reason. Pierna (pork) al pastor and even lengua might make for safer choices. Weekends-only posole sounds tempting, too, but we’re conflicted about the pescado empanizado. Yes, it’s seafood, but it’s also breaded and fried. Stick to shrimp, we suggest — even in combination with beef fajitas. Better yet as a part of the a la parilla special with both beef and chicken.