Fates Warning Back In SA With a Vengeance 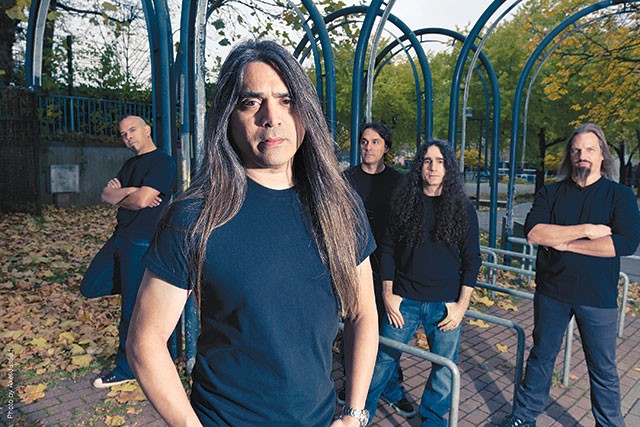 “It is really ridiculous how time got away from us that fast,” Alder told the Current. “We were always touring Europe, though, and we’ve all got our side projects. But our hardcore fans are still here.”

Many of those hardcore fans have been devouring Darkness in a Different Light, Fates Warning’s crushing new outing. Easily the band’s most metal effort since 1988’s No Exit, this new release marks their first since formerly former guitarist Frank Aresti (who left in 1995, came back as a touring member in 2003 and became full-time again in 2011) and new drummer/ native son Bobby Jarzombek (Halford, Iced Earth, et al) have joined the outfit’s ranks. It is also Fates Warning’s first album in nine years.

“We wanted to keep it organic, keep it real,” Alder said. “I like having melody over something really heavy. It’s got the progressive spirit … but there’s a melody over it where you can’t really tell that the timing is so askew. That’s one of the signatures of Fates Warning.”

Darkness also levels an unapologetic middle finger at accusations that Alder has lost his voice. Nonsense. Alder’s voice soars over the rekindled chaos of the Fates sound, but rather than flitter about the stratosphere as it did in his youth, it is now carried by the fullness of a rich baritone many of his peers lack.

“When I first started singing, I wanted to sing high because that’s what everyone else was doing,” he said. “But as I got older, it started to seem silly to me. You don’t need to do that to get your point across. So I found my voice and what I wanted to do with it right as it started changing. I like where my voice is.”

Aresti is unfortunately sitting this tour out due to “some great stuff going on in his personal life.” Many Saytown bangers could not imagine a wetter dream than to see Fates Warning with Bobby’s brother Ron—remember Watchtower? That Ron—on guitar. For the tour, however, Aresti was replaced with Mike Abdow (Frozen). Not that this deters Alder from performing for the motherland.

“I am really looking forward to playing in my hometown and seeing my friends and family,” he said. “I always enjoy playing in San Antonio, especially now with Bobby, a fellow San Antonian. I love that idea.”