Father's Day For the Foodie Dad

Father's Day is around the corner. Well, it's Sunday. And if you haven't gotten your dad a gift by now, it's time to head to your nearest liquor store/cigar shop/growler station/department store.

Or you could cook for good ol' pa'. We asked a few service industry dads what they wanted to chow down for this Father's Day and here are their answers.

"We meet up at their house and he smokes brisket, ribs, sausage, burgers, hot dogs, chicken quarters," Arciniega said. "Mom makes an enormous amount of rice and beans and I make guacamole and all the salsas."

His daughter Amaya Arciniega, 6, for whom the restaurant is named after, won't be celebrating with him this year, but the young "restaurant-owner" is dabbling into food already.

"She tells people at school she owns a restaurant," Arciniega said.

It could be in her blood — her dad's a chef and bar manager for the upcoming Botika where he's already crafted a 10-cocktail menu and her mom's a former pastry chef.

Amaya helps Arciniega's mother roll out tortillas in cooler months and has her own apron and mini rolling pin, "they come out looking like the state of Texas," he says.

Other than tortillas, the 6-year-old's favorite foods include Bill Miller's fries, bean and cheese tacos and pizza.
Though the two won't spend this Father's day together, the Arciniegas can look forward to measuring out a cake ingredients in the coming weeks. 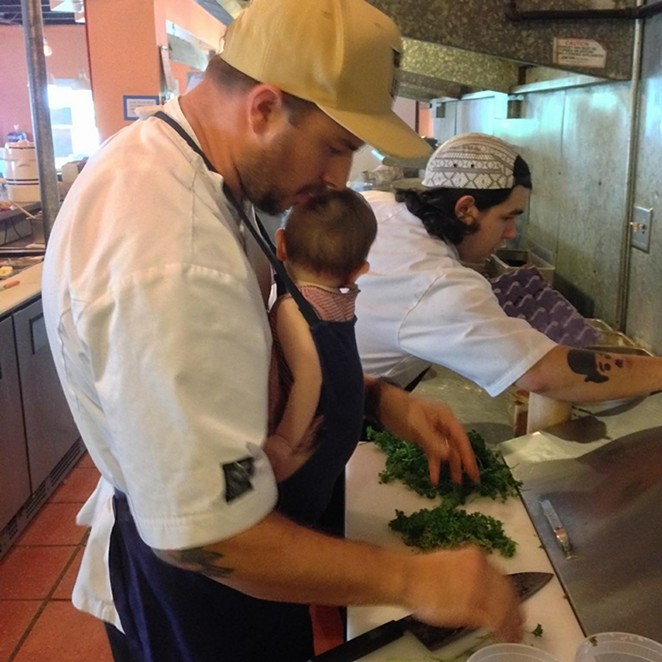 Pieter Sypesteyn and wife Susan have four children all five and under. But that hasn't stopped the chef from sharing his love of cooking with his clan that recently grew to include their first daughter.

Fans of Where Y'at Food Truck might remember first-born Willem from his days on the truck, when he'd play kitchen on Igloo coolers. The cooking lessons didn't end there — Willem knows the exact measurements and ingredients for making fluffy beignets.

"I had run out of ingredients for beignets so I called my wife to bring me the stuff so I could make them on the fly," Sypesteyn recalled. "She was listing the ingredients with Willem around and he asked, 'Mom, what about the sugar?'"

The rest of the wee Sypesteyns aren't immune to learning a thing or two about the kitchen life. Patrons of The Cookhouse are likely to catch the foursome out with mom and dad sharing family meal or learning how to sauté.
This Father's Day Sypesteyn will likely keep it simple with a grilled tri-tip, his favorite cut of beef that's similar to brisket with less fat but similar marbling. The chef will grill it up with a few veggies and keep things simple this Sunday.

At the Gonzalez household, dad Charles Gonzalez of Rosella Coffee Company and weekend anchor for KSAT 12, can sometimes make two to three different meals to keep his girls happy.

But Gonzalez wasn't always into food either. He credits a trip abroad to Spain while in college with helping him open his palate.

"Being in another country, unless you want to eat American fast food, you have to try new things," Gonzalez said. "Having that experience opened my eyes to these things."

Though Ella Sofia, 7, is still particular about the fare she has on her plate, Olivia, 9, is watching Mind of a Chef with dad in the evenings.

"We stay up some days and watch it together," Gonzalez said. "She's very cerebral, loves to think, loves science and the innovative things they do."

The girls are also old enough to handle brunch, the only objective for this Father's Day weekend.

"All I want to do is go to brunch. Last year we finally went to Feast, which was great because they have pancakes for Olivia and Ella can eat bacon and eggs all day, well now she can," Gonzalez said.