Favorite Films: Dark Comedies and Dramas Fill Our List of the Best Cinema of 2018

After watching 235 movies this year, here are my 10 picks (and a few honorable mentions) for the best Hollywood had to offer. 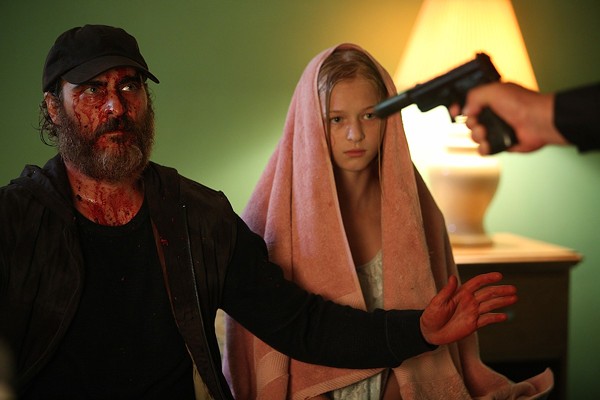 Besides praising three-time Academy Award-nominated actor Joaquin Phoenix’s striking turn as Joe, a disturbed veteran who works for a private investigator to track down missing girls, filmmaker Lynne Ramsay (We Need to Talk About Kevin) has created an unnerving and aggressive cinematic experience in You Were Never Really Here. There is a thin layer of grime that coats the narrative that is extremely hard to shake. There are scenes in the film where it almost feels like it could fade to black at any moment. As the dissonant and offbeat electronic score of Oscar-nominated composer Jonny Greenwood (Phantom Thread) pushes Joe to the brink, audiences may wonder if he will make things easier by simply removing himself from the equation. His self-hatred will make it tough for viewers to connect to the character on any meaningful level, but with YWNRH, it’s probably a good idea to keep a safe distance. 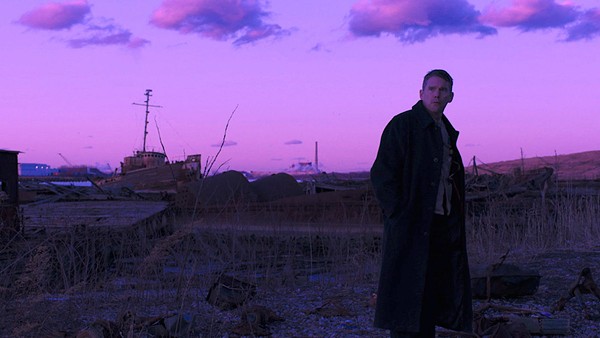 It’s never ideal when a film has an agenda and then proceeds to beat viewers over the head with it. So, it’s quite unexpected when a film as preachy as First Reformed comes along and finds a way to be an exception to the rule. It’s a haunting, strange and lyrical narrative on one man’s spiritual and political resurrection from the darkest corners of his consciousness. First Reformed brims with insights on anger, guilt, faith and personal autonomy. Written and directed by Paul Schrader, the film revisits some of the more philosophical, character-driven elements of his early screenplay work, including Taxi Driver, Raging Bull and The Last Temptation of Christ. Schrader taps into another tormented soul, and actor Ethan Hawke delivers a career-best performance. First Reformed is built to carry the burden of Schrader’s ambitious and inspired script, which includes a visceral final scene that will linger for weeks. 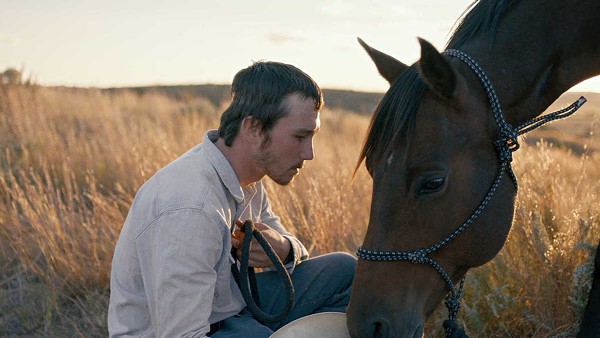 Chinese-American writer-director Chloé Zhao (Songs My Brothers Taught Me) has taken a tender narrative and transformed it into a breathtakingly beautiful drama that shoots straight to the heart. Yes, the performances from some of the novice actors in supporting roles are unpolished, but the spirit that emanates from the setting, characters, relationships and direction is brilliant. In The Rider, Zhao taps former bronc rider-turned-actor Brady Jandreau to play the cinematic version of himself, Brady Blackburn, a young, Native American cowboy from South Dakota reflecting on his life after suffering a severe head injury. The Rider is Jandreau’s film, and he delivers a complexity and cowboy flair to the role that is unmatchable. Watching him train colts on the rugged Dakota landscape, confronting the idea of what it means to be a man and simply appreciating being alive is what makes the film so emotionally fulfilling.

In At Eternity’s Gate, a biopic on Vincent van Gogh, Oscar-nominated director Julian Schnabel (The Diving Bell and the Butterfly) doesn’t take an antiquated concept and define mental illness as one specific thing or behavior. Everyone knows van Gogh suffered from some form of psychological disorder, so why play it up like other van Gogh films of the past? It’s one of the reasons Schnabel’s film is such an enlightening and unique experience. With At Eternity’s Gate, Schnabel, who is a famous painter himself, confronts van Gogh’s mental instability with inventive style and philosophical reflection. In doing so, he has given audiences one of the most creative and visually striking cinematic compositions about an artist in recent memory. Through handheld camerawork, distorted scenes and other stimulating experimental film elements, he allows viewers to see the world from van Gogh’s transcendent perspective. 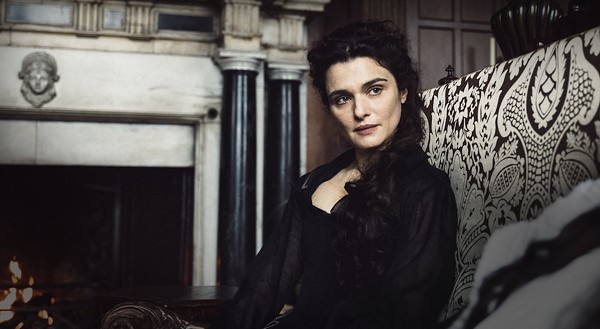 The Favourite is unlike any costume drama you’ve ever seen. It shouldn’t come as a surprise if you know the eccentric and invigorating work of Greek writer-director Yorgos Lanthimos in films like Dogtooth and The Lobster. Although Lanthimos hands off script duties this time around, his fingerprints are all over it. The Favourite is an acerbic and abrasively funny period piece featuring three of the best female performances of the year. Set in the early 18th century, it is loosely based on the reign of Queen Anne (Olivia Colman), the sickly crowned head who ruled Great Britain and Ireland until her death in 1714. Don’t expect a history lesson here, however. Lanthimos is more interested in the darker and comically absurd relationships Anne develops with her close advisor Sarah Churchill (Rachel Weisz), and Sarah’s cousin, Abigail Hill (Emma Stone). Hostility and deceitfulness have never been this wickedly entertaining.

Dark comedy is a tough subgenre to get right, especially when working off a script featuring uncomfortable subject matter that isn’t what most would consider knee-slapping material. For example, 2014’s Obvious Child and 2015’s Grandma are both well-written dark comedies about abortion. Director and Oscar-nominated screenwriter Tamara Jenkins (The Savages) seems to hit the same kind of tone with Private Life, a dark dramedy that tells the story of Richard (Paul Giamatti) and Rachel (Kathryn Hahn), a middle-aged married couple who are experiencing infertility and trying to have a baby through in vitro. Unsure about using a stranger as an egg donor, they turn to their 25-year-old step-niece Sadie (Kayli Carter) to see if she might be willing to help them conceive. Jenkins has crafted a genuinely touching and humorous human narrative about a husband and wife desperate for a family. It’s a poignant piece of filmmaking and Giamatti and Hahn have never been better.

4. Can You Ever Forgive Me? (dir. Marielle Heller) 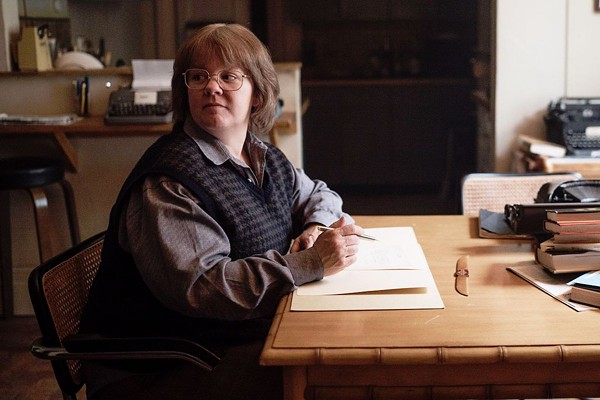 It’s a welcomed career move to see actress Melissa McCarthy change things up in the film Can You Ever Forgive Me?, her most dramatic role to date — and her most remarkable. Her character, late New York Times bestselling author Lee Israel, is well-matched to McCarthy’s self-deprecating wit and ability to make the flaws and vulnerabilities she brings to the role seem sympathetic and spirited. In Forgive Me?, Israel attempts to resolve her money problems by forging and selling fake, personal letters by deceased writers and actors. Directed by Marielle Heller (The Diary of a Teenage Girl) and co-written by Nicole Holofcener (Enough Said), Forgive Me? uses a cynical and clever combination of dark comedy and drama that builds on the narrative’s stranger-than-fiction premise with a pitch-perfect tone. The film is the type of work McCarthy will hopefully search out more as she expands her range.

There’s something very intriguing about watching an individual taking on Mother Nature with little at their disposal. These stories work best when there is an intimate narrative attached to those characters hoping to survive a situation they either have no control over (Castaway) or one they have undertaken on their own to test themselves (Wild). The latter is the case for military veteran and single father Will (Ben Foster) and his 13-year-old daughter Tom (Thomasin McKenzie) in the compelling drama Leave No Trace. Living off the grid in a nature preserve outside Portland, Will and Tom learn to master their solitary lifestyle until their attempt to hide from the outside world ends abruptly. Directed and co-written by Oscar nominee Debra Granik (Winter’s Bone), Leave No Trace is thought provoking and emotionally complex. Granik has captured an authentic dynamic between two characters who find themselves at an impasse with one another.

There’s no denying the beauty and timelessness at the heart of Oscar-winning director Alfonso Cuarón’s deeply personal drama Roma. It’s as close to cinematic poetry as you can get, and Cuarón, with an expert-level attention to detail, places us at the center of his story — watching, listening, waiting and cherishing every delicate moment. As with all his past films, there is an intimacy in Cuarón’s work that is unlike any working director today. It’s never been more apparent just how meditative his voice has become than with Roma, an autobiographical film based on his childhood in Mexico City during the 1970s and told from the perspective of the woman who helped raise him — his nanny (Yalitza Aparicio). Appreciate what Cuarón has constructed with Roma. Like other recent image-heavy films such as Tree of Life, Dunkirk and The Revenant, what Roma lacks in standard narrative substance, it makes up for in Cuarón’s skill as a visual storyteller.

Vice, Oscar-winning filmmaker Adam McKay’s biopic on former U.S. Vice President Dick Cheney (Christian Bale in an Oscar-worthy performance), is the most polarizing Oscar-contending film among critics since 2004’s Best Picture winner Crash. In Cheney’s world, McKay shows audiences just how much influence the VP had in the administration and does so with a sharp and scathingly witty script. Cheney’s wraithlike rise in the ranks saw him turn the “nothing job” of VP into one of incredible depth and power — like a cosmic comic-book villain who devours planets. Politics is a whole different game than McKay tackled in his last film, 2015’s The Big Short, on the imploding housing bubble, and he came ready to play. And like most politicians, McKay jabs low and hard and sometimes unfairly, but always promises an entertaining fight. His foray into political theater is captivating, outrageous, satirical gold.

And 10 Honorable Mentions: Capernaum, The Death of Stalin, Eighth Grade, Hereditary, I Am Not a Witch, Isle of Dogs, Lean on Pete, Searching, The Sisters Brothers, Three Identical Strangers

Film best movies 2018 new movies Vice Roma Leave No Trace Can You Ever Forgive Me? Private Life The Favorite At Eternity's Gate The Rider First Reformed You Were Never Really Here Capernaum The Death of Stalin Eighth Grade Hereditary I Am Not a Witch Isle of Dogs Lean On Pete Searching The Sisters Brothers Three Identical Strangers