Fea And Planned Parenthood Want You to Get It On 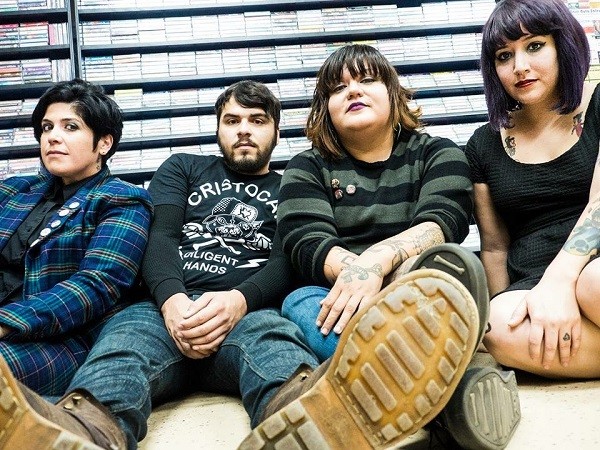 In yet another instance of local musicians doing good for the community, Fea is set to play a unique and imminently worthy Planned Parenthood fundraiser at Paper Tiger on October 20. The multifaceted event, billed as "Get it On!," will feature games (like Viva la Vulva trivia and Name That Contraceptive), prizes (including special items from The Love Shack Boutique), and themed-drinks (like Pro-Choice Punch and Safer Sex on the Beach), before a rousing (arousing?) performance from Fea. All of the proceeds from the event will go to Planned Parenthood South Texas (PPST).

The Chicana/neo-riot grrrl punk outfit, formed by Girl in a Coma members Phanie Diaz and Jenn Alva, is by no means any stranger to activism, and this fundraiser is a prime example of how empowerment through music can become empowerment in the social realm. Diaz told the Current that the band sees music as "a very powerful tool for change" that can be used to "help people better understand [situations]," themselves, and their role in creating better communities.

As the band prepares to continue the tireless touring that has filled its 2016, aimed at supporting its furiously infectious debut album, which dropped in July, it's no surprise that Fea would take time out to support Planned Parenthood's work. Diaz explained that women "should not be told what to do with our own bodies" and that the group will do whatever it can "to help keep funding for women" via Planned Parenthood.

Planned Parenthood of South Texas spokeswoman Mara Posada told us the event was designed "so that people can talk comfortably about sexual health and responsibility and learn how to have great safer sex." She says too many people still lack basic knowledge of birth control, sexually transmitted infections, and even female anatomy. "We want people of every sexual orientation and gender identity to feel welcome and have fun," she said.

Aside from raising funds and fostering awareness of sexual health issues, Posada hopes that "Get it On!" will help make people "aware of all the high-quality health care that Planned Parenthood offers in San Antonio."

After noting that this is Planned Parenthood's "first event featuring a band in a long time," and that the organization is "hoping to do more events with musicians in the near future," Posada said that the biggest problems facing Planned Parenthood are rooted in the "relentless anti-choice politicians in Austin," that still defend Texas' omnibus anti-abortion law, also known as HB2, which the U.S. Supreme Court struck down as unconstitutional earlier this year.