Fear stalks the characters of 'I-DJ', but the music plays on

by Lauren A. Silva 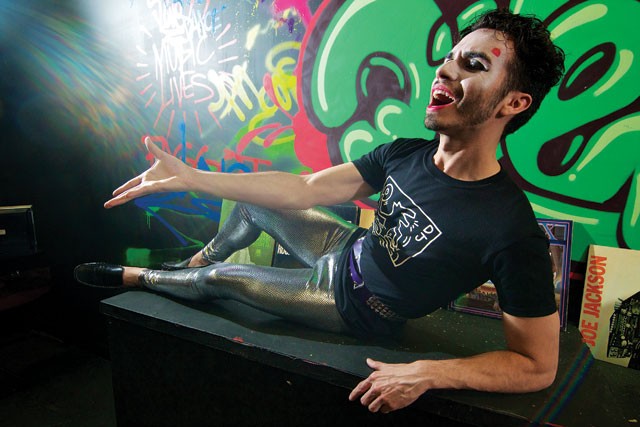 Setting a beautiful standard for the new Overtime Theater, I-DJ, written by Gregg Barrios and directed by Matthew Byron Cassi, explores aspects of the late 1970s Chicano movement, homophobia, the rise of disco, and the outbreak of AIDS in L.A. club land as seen through the eyes of gay Chicano DJ Warren Peace.

Peace’s story unfolds at the Pair-A-Dice Ballroom on the anniversary of the closing of A&M Records, the label that created “the soundtrack” of his life. Peace (played by Rick Sanchez) has challenged soon-to-be-known-as DJ Silence (played by Dominique Tijerina) to play a dozen cuts on his playlist, as he looks back on his life and shares his recollections with the audience. The prize for a good spin is being given Peace’s DJ spot for one night while he stars in Ham-a-lot, a gay one-man adaption of Hamlet.

Sanchez embodies the character of Peace wholly, delivering jokes with an infectious, flamboyant personality that lives up to the engaging script. He makes a point of making eye contact with individual audience members, creating an intimacy that transcends typical performance. But here the underlying presence is fear: fear of death, of age, of AIDS, and of being oneself. The specter is attacked with morbid hilarity. In one instance Peace reads off results of two AIDS tests dressed as a magician. While Sanchez's character was real and relatable, Tijerina portrays different characters (DJ Mutant, DJ Silence, a hustler) throughout the play — including, perhaps, Peace's younger self, though the staging left me with no clear answer.

If you’re not familiar with Spanish, bring someone who is. There are a multitude of Spanish terms and phrases that are sprinkled throughout the play and are vital to the story.

Filled with dance, club tunes, lines of Shakespeare and Spanish homilies your tia might have told you, I-DJ opens a window onto another matter: the height of the plague years, when a positive AIDS test was a death sentence. And a twist at the end (no, I'm not telling you) reminds us that we still haven't come to terms with the disease.