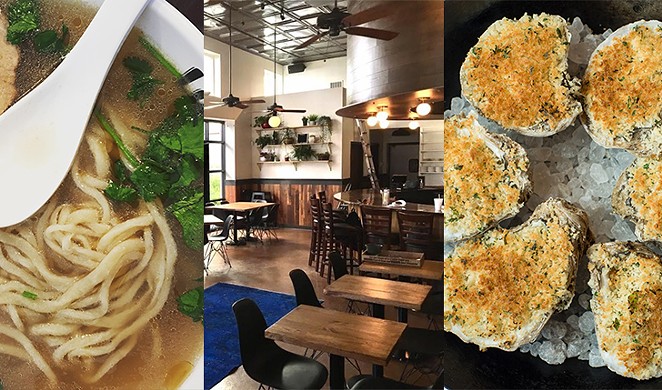 It's been a busy month for restaurant openings and sadly, closings.


Let's start with the newbies:

Lucky Noodle, sister eatery to Kungfu Noodle opened off Blanco with a bigger menu, bigger space and open kitchen so you can check out the noodle-pulling action. Find them at 8525 Blanco Road, (210) 267-9717.

Another Dunkin Donuts/Baskin Robbins opened in the city's far north side on Valentine's Day at 23505 Hardy Oak Boulevard.

Bexar Pub, sister bar to currently closed Folc and Park Social, opened in the city's east side on February 17. Think patio sippers, and soon the return of the Folc Burger. Find them at 114 Brooklyn Ave., (210) 387-3882.

And now the closings:

The biggest food news this month came out of John Besh's Lüke San Antonio which closed its doors at the end of the month after six years inside its Embassy Suites location.

Cullum's Attaboy is currently out of commission after the Airstream sustained fire damage.

In barbecue news, Burnt Ends vacated it's Blanco Road location at the end of January. The eatery announced its move earlier this week on Facebook. No word yet on where the barbecue joint will open up shop next.