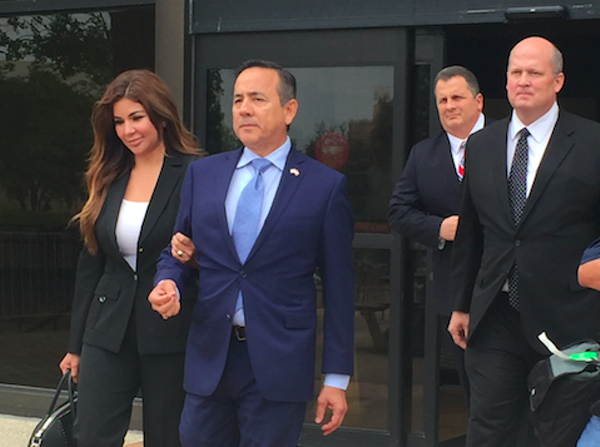 State Senator Carlos Uresti, who is facing federal fraud charges for his involvement in a Ponzi scheme, has been told to find a new attorney in his case. The reason? His lawyer played a key role in Uresti's alleged crime.

When he's not at the Capitol, Uresti runs a private law firm in San Antonio. In May, Uresti was indicted on 11 counts by a federal grand jury for recruiting his past clients to invest thousands (often the payout from cases Uresti helped them win) in a now-bankrupt frack sand company, FourWinds Logistics. Uresti received a hefty commission for each of the investors he signed on to back the San Antonio company.

One of those clients was Denise Cantu, a Harlingen woman whose exploding car tire caused a 2010 wreck that killed her 13-year-old daughter, 4-year-old son and two friends. After winning her criminal case against Ford, Uresti convinced Cantu to invest $900,000 of her settlement money into FourSands. She lost all but $100,000 — while Uresti pocketed a $27,000 commission for her recruitment.

Uresti then did one more favor: He referred Cantu's civil case to fellow San Antonio lawyer Mikal Watts, the same lawyer who Uresti chose to represent him in his current federal case. Which is where the case begins to tangle. Cantu is one of plaintiffs suing Uresti in this case, meaning Watts would eventually have to defend one client against another former client.

“The issue of divided loyalty is too great,” wrote U.S. Magistrate Judge Henry Bemporad in his Monday ruling. Since these two cases are "substantially related," Bemporad said the conflict of interest in this particular case overrules Uresti's right to pick his own counsel. Bemporad said it was one of the hardest decisions he had ever made as a judge, according to the San Antonio Express-News.

This isn't Watts' first brush with fraud charges — he represented himself in a 2013 federal case charging him with fabricating a client list in order to win a $2 billion class-action lawsuit against BP for damages from the Deepwater Horizon oil spill. Watts was acquitted in 2016.

Watts plans on appealing the judge's decision within the next 28 days, arguing that since it was too "difficult" a decision for Bemporad to make, constitutional law should override the conflict of interest claim. If Watts' appeal fails, Uresti will be required to use a public defender.