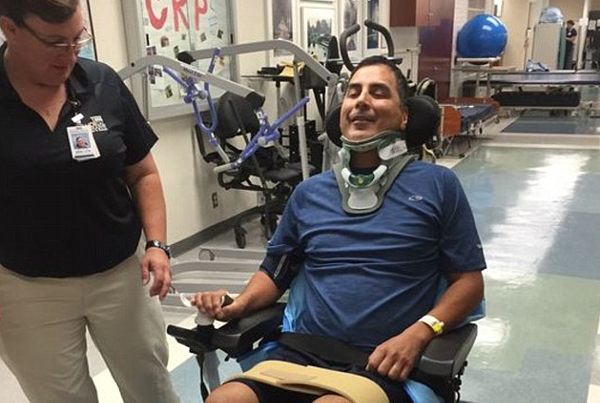 Rogelio "Roger" Carlos was just photographing the construction of his family's pediatric clinic on the far northwest side on May 20, 2014 when an undercover San Antonio police officer, dressed in civilian clothes, approached him. Unfortunately for Carlos, he was also wearing a white T-shirt.

The San Antonio Police Department says the undercover officer thought Carlos looked like a suspect, who was apparently wearing the same color shirt, who'd just ditched his car at a nearby restaurant and fled police on foot. According to a lawsuit Carlos later filed against the department, the officer and at least two others who soon joined him in beating and kicking Carlos, at one point jumping on his back and neck with their knees. The undercover officer later said he used force because Carlos wouldn't obey orders; Carlos says the cop just wouldn't listen to him.

Carlos' back pain after the encounter was so bad that 18 months later doctors recommended back surgery. Complications during the operation left him nearly paralyzed.

After a months-long U.S. Department of Justice investigation into the incident, the feds announced Thursday that the three officers involved won't face federal charges. In a statement, U.S. Attorney Richard Durbin said, "The investigation did not develop sufficient evidence to prove beyond a reasonable doubt that police officers knowingly and willfully used excessive force to deprive Mr. Carlos of his civil rights."

The three officers were named in a federal civil rights lawsuit Carlos filed against the department earlier this year. One, an undercover SAPD officer assigned to a local multi-agency drug trafficking task force, is listed only as "Detective John Doe" (SAPD won't identify him due to his undercover work). The other two are SWAT officers identified as Carlos Chavez and Virgilo Gonzalez.

In his lawsuit, Carlos claims the officers involved in the chase didn't communicate with each other or follow proper protocol to make sure they even had the right guy when they stopped Carlos. The suit also claims the department has inadequate training, policies and supervision, leading to such cases of excessive force. “Defendants Chavez, Gonzalez, and Detective John Doe are liable to Plaintiff because they knowingly and intentionally, or with reckless disregard for the truth, brutally assaulted Plaintiff without any reasonable suspicion that a crime had been committed or that Plaintiff was actually engaging in a crime,” the lawsuit alleges. “It is not illegal to wear a white T-shirt.”

San Antonio police chief William McManus has previously told the Express-News that the officers involved in beating Carlos got five-day suspensions. Which doesn't mean they actually missed any work. Under the department's disciplinary rules, rules the local police union refused to change in recent contract negotiations with the city, the officers simply gave up some leave time they'd accrued so they could remain on duty despite the suspension.