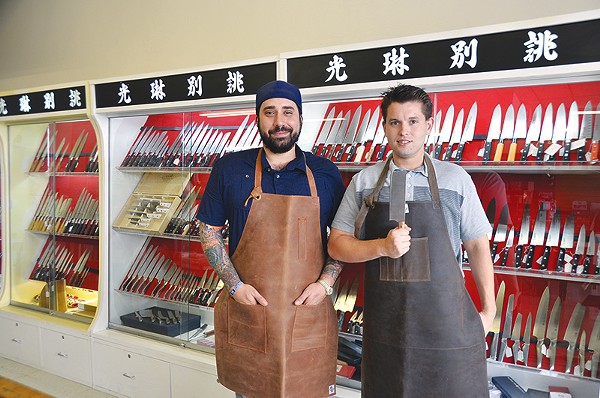 San Antonio feels like the smallest big city in Texas. Where six degrees of separation are usually enough for most folks to find some sort of connection, San Antonians can do it in two. I'm exaggerating, of course, but it's hard to shake this feeling when we take an even closer look at two business owners who shared more than a few links.

Roger Javier Treviño, 34, has been in and around the food industry since he was a teen. Fans of Los Barrios might remember 14-year-old Treviño cutting his teeth bussing tables at his aunt's restaurant (he's related by marriage to Diana Barrios Treviño, now owner of Los Barrios along with other family members).

On his dad's side, Treviño's grandfather owned United Meat Co. off South Laredo Street and, like most of the butchers and meat markets in town, United purchased supplies from Rodriguez Butcher Supply Company, which has been in business since the early 1900s.

Owned by Samuel Rodriguez, 76, and son Donny, who was basically born into the business, Rodriguez Butcher Supply Co. at 1715 W. Commerce is trying to break into the foodie market. Though it has always catered to butchers, chefs and hunters (Rodriguez Butcher Supply goes through several hundred meat grinders during deer season), the shop is also open to newbie cooks that are looking to beef up their arsenal of kitchen appliances.

That's where Samuel's grandson, Philip Fickel, one of eight grandkids, comes in. "I peddled around until about two years ago when I got more involved and thought 'how can we grow this?" Fickel told the San Antonio Current.

Though it doesn't look like much outside, the interior of the shop tells another story. Fickel, a former car salesman who hopped on board the West Side shop in 2010, is helping expand Rodriguez's offerings. Examples include a wider range of knives and gadgets (think sous vide machines, induction burners and the like) chefs geek out over — such as a $2,000 Wüsthof Ikon Damascus chef knife.

Fickel, 27, is a quirky character that's got an eye for knives and a small following of chefs who visit Rodriguez for their metal needs. A visit on a Wednesday afternoon last week included stops by staffers from Southerleigh, The Granary and others.

The shop is also adding knife seminars to help chefs like Stefan Bowers and Ezekiel Cavazos keep their favorite blades as sharp as possible.

And where chefs are to be found, that's where Roger Javier Treviño wants to be.

The University of the Incarnate Word alum with a communication major and fashion merchandising minor launched The FoodWhore Company in 2010 in Los Angeles. After sending out 168 resumes and reels out to TV stations across the country, Treviño decided to loop back to his passion for fashion design and get to work making stylish, comfortable kitchen gear.

"I wanted to be in front of people," said Treviño of the career change that led him briefly into media. "But, I've always said innovation isn't about having one good idea ... it's about having great ideas at a rapid pace."

Treviño's designs cater to cooks and then some — he's crafting leather and canvas aprons for executive chefs around town, along with entire restaurants and bars (you'll see the custom designs at Smoke, Starfish and Paramour). He's up to 20 different aprons, chef bags, messenger bags, knife rolls, shirts, leather bracelets — you name it, he's likely got it or designing it.

Though the majority of his sales come through his website — Aaron Sanchez of Food Network's Chopped fame also dons FoodWhore clothing these days — chefs and cooks can find his cook wear at Rodriguez Butcher Supply Co.

"It was a bit funny, when Javi called and said, 'I own a company called FoodWhore,'" Fickel said.

Though Treviño's uncle Roland (part-owner of Los Barrios) worked with the Rodriguez clan through the 1990s and still has yellowed receipts from 1960 for an order his father made through the company, Fickel and the younger Treviño met just as their business relationship was starting.

"Philip came into the Mezcaleria and was showing the guys some knives," said Treviño, who bartends on the side. And then they put two and two together.

So whether you're looking for badass cutlery or a handcrafted roll to put it in, you needn't go farther than the city's West Side to find them.