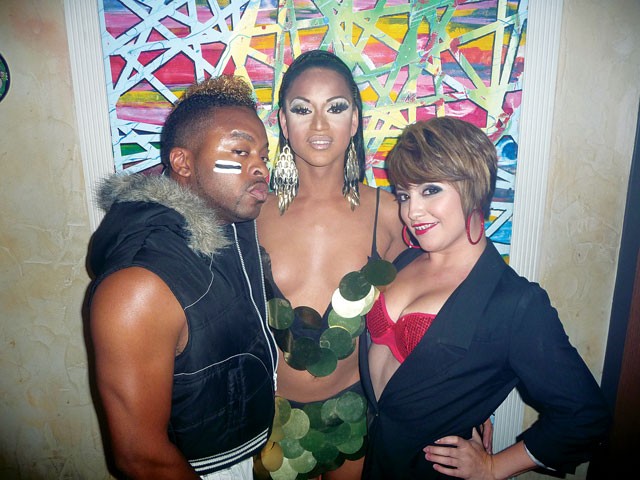 "Dónde está la pinche gente?!" echoes across a nearly empty room. It's almost midnight on Sunday at Club Empire, a Northwest side nightclub that successfully partners with local radio stations other nights of the week. The voice belongs to Felisha Andrews, the hostess and emcee of "Submissive Sundays," a party that promises "sexy drag comedy and lingerie shows." Donning a shimmering bikini top and miniskirt adorned with oversized paillettes (picture sequins on steroids) and chandelier-style earrings, Felisha is all dressed up with no one to show. Without drinks to mix, bartender Peter Montejano practices his flair techniques behind a bar scattered with glowing plastic bracelets — party favors that one bored night owl links together to make a necklace. DJ Dru spins pulsing tech-house by Deadmau5 and the like, but no one takes the bait. Over the mic, Felisha, one of many local drag performers who have adopted the last name of 2006 Miss International Queen Erica Andrews (who told the Current in 2010 she'd had her tubes "temporarily tied"), announces the night's hard-to-believe drink special: $2 you-call-its "for all the lesbians, perverts, gays, and drug dealers!" A couple of stiff ones later, the entertainment begins. More of a cabaret-style arrangement than the "sinful sexy show" advertised on the flyer, the performances range from freestyle dancing by Trevion Diamond LaRue and Andrei Rise Desante to a live number by vocalist Starlett Monroe and a sultry lip sync by Felisha. Mouthing the words to Britney Spears' "(Drop Dead) Beautiful," she struts across the dance floor defiantly, collecting tips and making a fierce batch of lemonade from the night's lemons.