Fiest-aah!: Will 18 days of party madness kill us or make us stronger? 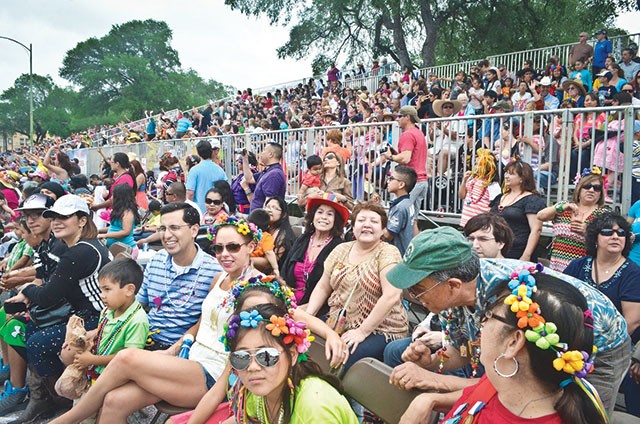 I had just moved to San Antonio when one day I noticed a bunch of bleachers stacked beneath the highway underpasses near Downtown. I asked my roommate if she knew what they were for. “Probably Fiesta-related,” she answered. “Fiesta?” I asked, “What’s that?” My roommate, originally from New Orleans, home of multi-day party standard-bearer Mardi Gras, rolled her eyes and proceeded to recite a list of the annual celebration’s crimes against culture, beginning with the crush of humanity at Night in Old San Antonio (“Don’t even go downtown in April if you can avoid it”) and mentioning raw oysters consumed outdoors in the hot sun, tacky flip-flops and the river of muck and confetti and beer that flows alongside each major parade.

None of my newfound friends or colleagues particularly stood up for Fiesta, either—with the exception of the notably laid-back King William Fair, which everyone agreed was worthwhile. I went for years without experiencing the Flambeau Night Parade, the Battle of Flowers Parade, NIOSA, etc … I took my roomie’s advice and stayed away from Downtown, and I hardly noticed.

Then, last year, I finally Fiesta-d, hard. My cousin and dad planned to visit me the last weekend of Fiesta and I decided to get as serious as possible, which meant NIOSA Friday night, the King William Fair and Parade the next morning and the Flambeau Parade at night. There may have been some Gartenfest in there, too. It was so much fun that, in the midst of writing this, I received a text message from my cousin asking if we were still on for a Fiesta weekend this year. Yes, yes we are.

But does that make me a true believer and exultant in Fiesta’s new Easter-related extended schedule bringing us 18 days of revelry compared to the previous 11? Not really.

First of all, rewinding back to last year, I happened to take a long bike ride along the river reaches with my dad the last day of Fiesta, right after a torrential downpour had washed several days of Fiesta trash into the river. It was truly a disgusting spectacle, and now when I think of Fiesta, I think of all that litter needlessly flowing into our water system, and that it’s essentially sanctioned by the City and not responsibly addressed afterward. While it’s great the City is focusing on a bigger recycling presence during Fiesta, it doesn’t solve this litter problem.

Secondly, we went to NIOSA right when it opened, and had a great time until suddenly we couldn’t move anymore because of all the people. It was so crowded that we spent 45 minutes slowly making our way to the nearest exit, which was about 800 feet away. I think overcrowding at Fiesta events in general is a disaster waiting to happen; indeed there was the 1979 shooting spree at the Battle of Flowers parade and the rape and murder of a little girl who got separated from her family during a Fiesta event in Market Square in 1999. Some organizations should compare their events’ popularity with the necessity of its historic location and make a call whether to search out a larger venue or put a more realistic cap on attendance.

I’m not really sure why the City was even allowed to alter the schedule to accommodate a religious—not a federal—holiday. I know there’s a lot of Christians in San Antonio, and I understand much of this came about because of Catholic St. Mary’s University not wanting their Oyster Bake (a major scholarship fundraiser) to conflict with Easter while still wanting to qualify as an official Fiesta event, but separation of church and state is not something to be overruled for any reason, no matter how “understandable.” Moreover, some Fiesta events, like the Southwest School of Art’s Fiesta Arts Fair, will continue on Easter weekend anyway, as have several others in the past; this is the first year Easter has caused an extended Fiesta.

“We’ve had it on Easter before,” said Paula Owen President of SSA, “we went back to our records and we looked at the numbers and we decided that because ours is a family-friendly event, it would be the kind of event that people might still attend on Easter weekend, and in fact we might even have more families attend.” Perhaps if St. Mary’s University’s event, sponsored by Bud Light and featuring musician Tone Lōc of “Wild Thing” fame, was more … Catholic, the University wouldn’t be so concerned with its falling on Easter weekend.

But beer and booze, and the enjoyment thereof, is such hallowed part of the Fiesta tradition that the Flambeau Parade this year made the questionable choice of crowning Dos Equis’ “The Most Interesting Man in the World” as its grand marshal. And yes, the beer company is a primary sponsor of the 2014 parade. Being an employee of the Current, I recognize it may seem awfully sanctimonious of me to suggest sponsored, alcohol-fueled events are anything but a ton of fun, yet the Flambeau Parade exemplifies just how transparent our so-called traditions’ relationship to marketing opportunities really are. Selling out like this will gut whatever quirky, hyper-local feel of Fiesta remains faster than you can say “show me your shoes!”

But hey, like I said, I actually enjoy Fiesta, and if the people want more Fiesta, or Fiesta that doesn’t conflict with a major Christian holiday, so be it. But, do most people want a longer Fiesta? According to our poll, no. We asked readers how long Fiesta should last in San Antonio, with options to extend the length of Fiesta even further than 18 days, stick with the new 18 days, go back to the previous 11 days or to do away with Fiesta all together. On either end of the spectrum, 15 percent wanted as much Fiesta as possible and 15 wanted to ditch it completely. A quarter of respondents thought the new, 18-day length was just right. Forty-five percent wanted to revert to the 11-day Fiesta. That means that 60 percent of respondents either hated Fiesta or wanted it back to 11 days and 40 percent were in favor of more Fiesta-ing.

Perhaps that 60 percent is comprised of small business owners, like the ones Richard Marini interviewed for the Express-News last summer, when the Fiesta commission announced plans for an extended celebration in 2014. Some restaurateurs and nightclub owners take a financial hit at this time of year because revelers clog their downtown restaurant tables during parades or ignore their cultural offerings in favor of Fiesta events. To quote Marini, some small business owners feel Fiesta “sucks all the oxygen from the city, leaving residents little time, money or energy to do anything else.”

Perhaps other people agree with me on the above points, that Fiesta at its worst can be wasteful, greedy and shameless, straining our environment, endangering people and turning traditions into marketing opportunities for multinational corporations. That’s not to say a Fiesta at its best doesn’t exist, it does, and when it’s at its best it causes people like my cousin to mark off her calendar a year in advance to enjoy the unique, fun-filled celebrations. But as the City of Austin re-examines SXSW’s excess in the wake of a music festival overrun by marketing and a horrific, fatal drunk driving accident that killed four and injured dozens, we need to remember that there really is too much of a good thing.