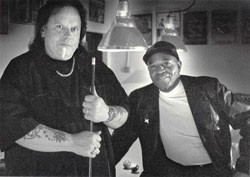 
The great blues revival of the early ’80s, sparked by Stevie Ray Vaughan, came with a price. From that point on, blues clubs were inundated with bands that felt the need to schlock up the 12-bar form with rock cliches. This syndrome was brilliantly depicted in the movie Ghost World, when Steve Buscemi’s character is mortified to find that his idol must open for a crass, cheesy band called Blues Hammer.

Smokin’ Joe Kubek, a heavily tatted 51-year-old journeyman with a long, white soul-patch, has been playing in North Dallas bars since the early ’70s. He even worked with Freddie King before the great blues guitarist’s 1976 death. But he’s really a product of Stevie Ray’s breakthrough. For nearly 20 years, Kubek and singer-guitarist Bnois King have cranked out a brand of roadhouse rowdiness that obliterates old concepts of blues purity.

King is an awkward, uninspiring singer and neither man has much to offer as a songwriter. As a guitarist, however, Kubek lives up to his nickname with a fiery attack that elevates his generally mundane material. It’s telling that the most appealing song on Kubek and King’s new Alligator Records release, Blood Brothers, is the instrumental “Freezer Burn,” in which they throw everything out the window and simply let Kubek rip it up for a few minutes. $8 members/ $10 General, 6pm Sun, Apr 27, Fiesta Heritage Blues Series, Sunset Station, 1174 E. Commerce, (210) 641-8192