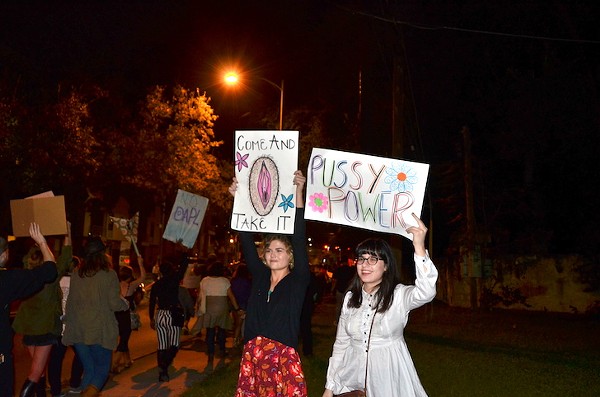 "That song is women's anthem when she comes unto her own,
That flag is woman's banner and should float from zone to zone,
That cause is right and justice, and should rule the world alone,
As we go marching on."

So goes a song from a 1909 suffragette songbook Rebecca Lawrence-Weden plans on teaching a busload of women on their 50-hour, three-day journey to the Washington, D.C. next weekend. Weder, 64, is one of the fifty San Antonio women who signed up to travel together to the Women's March on Washington on January 21.

"I have a interracial family," Lawrence-Weden said. "After hearing all the hateful rhetoric and the animosity during the election, I knew I had to do this for them. We can't go back."

Falling the day after Donald Trump's inauguration, the D.C. Women's March (the inspiration for hundreds of smaller marches sprouting up across the country) aims to share a message of determination and resistance to the anti-women sentiments and policies lodged into the new administration's platform. Around 200,000 people are slated to attend — going far beyond the amount of people expected to show up for the inauguration.

The San Antonio road trip — compiled of women of all ages, backgrounds and sexual identities, many who just met each other last week — was the brainchild of Marissa Anne Bennett, a San Antonio woman who was driven by the election results to get as many San Antonian women to D.C. as possible.

"I was in utter shell shock after the election," Bennett said. "This was not the America I thought I knew. I had to do something proactive."

After paying for a chartered bus with her own money, she shared her plan with local women across social media. Bennett also began an online fundraising campaign to help women who couldn't afford the $350 round trip.

Now the bus trip has a long waiting list — and a serious game plan.

"We're going to read essays and watch documentaries along the way to get ourselves in the right mindset for the march," said 21-year-old Cecilia Gutierrez. Along with suffragette songs, Lawrence-Weden is collecting protest songs from the '60s to play over the bus stereo. On the day of the march, she'll wear a "Question Authority" pin her mother gave her when she was a girl.

Gutierrez hopes the group can combat any preconceived stereotypes other women at the march may have about Texans by simply participating in such a landmark event.

"It's history. There's no other way to describe it. When my future children ask me if I was at the women's march on Washington, I want to say 'Yes'," she said. "I have a sense of deep responsibility to the generation ahead of me."