File Under Jazz: Pianist Vijay Iyer on electronic music, Limp Bizkit and the limits of jazz 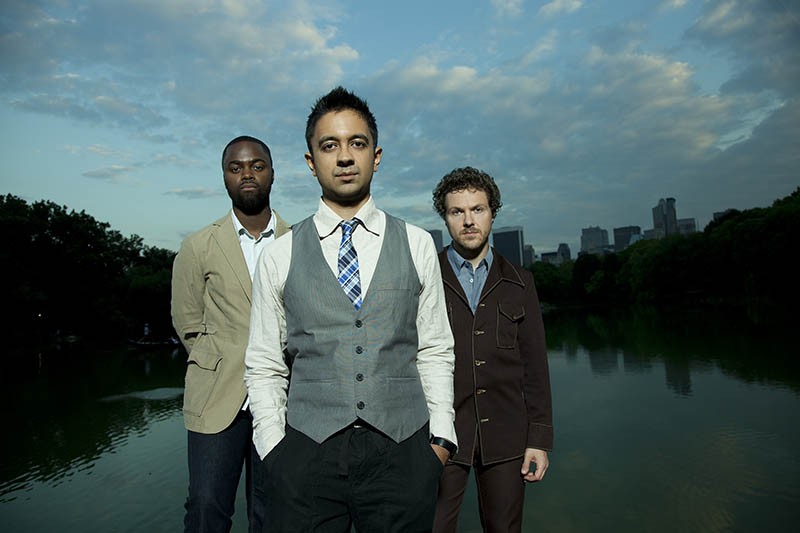 In September of 2013, pianist Vijay Iyer won the enviable MacArthur Genius Grant—$625,000 in cold, unfettered cash—for his insane creativity and nonstop achievements in jazz. Since the dawn of his career, it's been clear that Iyer was destined for prizes and certifiable genius. But, at first, it was unclear what field the accolades would pile up in.

In the early '90s, Iyer entered a doctorate program in theoretical physics at Berkeley. As the thesis pages grew thick, he felt a gravitational pull toward the piano bench and the Oakland jazz scene, splitting time between his polar interests. To draw him definitively to music, Iyer cites saxophonist Steve Coleman as "one of the main catalysts" for his career in jazz.

"I entered [Berkeley] in '92 and he came out in '94 for an extended residency in the Bay Area and I got folded into it in various ways," says Iyer over the phone. "I helped organize it, then began sitting in a lot. Afterwards, he asked me to come on the road with him. When I had that opportunity, I thought, 'I better really think about this,'" says Iyer. "This can't just be a hobby if I'm doing my dream, going on tour with one of the greatest living musicians. So that upped the ante for me. I had to start taking it seriously as a life task."

Since his initiation, Iyer has joined a generation of pianists—including Robert Glasper, Ethan Iverson and Jason Moran—who've brought hip-hop and electronic music to the foreground of the art form. Iyer often performs with Ableton Live, the digital workstation used by Diplo, Grimes or anyone looking to perform electronic music in real time. "The way I integrate it into what I do in performance is still kind of a challenge," says Iyer. "I try to build environments that I can improvise with inside of Ableton Live. It's sort of like DJ-ing, I guess. You're curating things and mixing, but I'll try to do that and play piano at the same time."

With Ableton, collabs with rap rascals Das Racist and forays into classical music, Iyer chips away at the image of the jazz pianist one multivalent note at a time. "I don't really know what people mean when they say jazz anymore," says Iyer. "It can mean all kinds of things to all kinds of people. It usually seems to mean something as a way to limit, like, 'well that's not jazz. I ran into this last night at a concert. I was doing a solo piece with film and someone came up to me afterwards and said, 'Oh, I really enjoyed the program, but I thought you were a jazz musician?'"

This criticism of the word is nothing new. In the pre-war generation, some musicians scoffed at the word jazz as a white invention; jazz meant black music, limiting their reach in a segregated America. "I don't like the word jazz, but it is the one that is usually used," said Duke Ellington, in 1945.

In the same '45 interview, Ellington also said, "Jazz is the freedom to play anything whether it has been done before or not." If anything, Iyer subscribes to this tradition in jazz, the history of artists exploring the porous borders of the music. "I learned how to do everything I do from elders in the jazz and creative music community," says Iyer. "Including people who push against the category. When I worked with Roscoe Mitchell and Wadada Leo Smith and Steve Coleman and Butch Morris and George Lewis—these are all people who are radical pioneers in creativity. They get filed under jazz, but that's not a broad enough frame for the kind of things they do."

So far in his career, Iyer is most recognized for his trio with bassist Stephan Crump and drummer Marcus Gilmore (grandson of kit legend Roy Haynes). Their 2012 album Accelerando bursts with ingenuity, with tunes from Michael Jackson, Duke Ellington and Flying Lotus alongside lucid originals. On "Human Nature," Iyer and crew toy with the King of Pop's melody line before breaking into a caterwauling romp of collective improv. As is common in his work, Iyer pays special attention to the deep, grumbling keys of the lower register and fleeting arpeggios in the right. Meanwhile, Crump and Gilmore crash around the piano like satellites in close orbit.

The trio's new release Break Stuff, out on ECM in February, shares an unfortunate cousin with Limp Bizkit's '99 single of the same name. "I did not know that," says Iyer. "Hopefully no one will mistake one for the other." It's unlikely. Where the nu-metal "Break Stuff" bouts with the rest of the Bizkit catalogue for title of Worst Song of All Time, Iyer's rendition finds the trio playing tighter than ever. "It's always been very interactive," says Iyer, "but what I hear now is both Stephan and Marcus in the moment with sound. And hearing them making choices about tone and texture and touch and stuff like that. Really in the moment."