Fill Up Your Growlers at These Joints 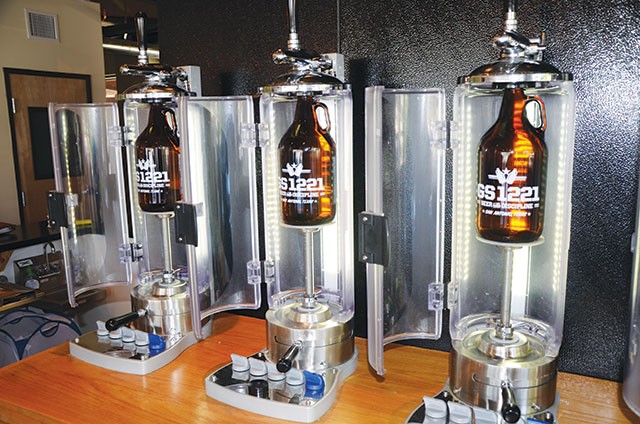 The options are plentiful when it comes to replenishing your growler with your go-to beer or an adventurous brew you’ve been dying to try. Head to the joints below and stock up your fridge.

Alamo Drafthouse Cinemas
Multiple locations
A growler might run you a cool $25, but you’ll be free to refill it during every movie and after. The lineup changes frequently and is split into specials and categories like Smooth and Balanced, Weird and Wonderful, For Hop Heads, Dark and Rich, and Crisp and Refreshing. You’ll find big-name craft brews from across the nation as well as a few Texas and San Anto faves. Prices vary, but you’re looking and an $18 to $26 investment per refill.

Bar Blanco
Inside Whole Foods at the Vineyard
8403 Blanco
Wine and beer on tap while you shop—what’s not to love? There are 10 taps to choose from and plenty of bottled wares to sip. Empty growlers start at $6 for either growler size and prices range from $6 to $16 for 32-ounce refills and $9 to $25 for 64-ounce refills. Find an up-to-date list of brews available (Brooklyn’s Oktoberfest, Jolly Pumpkin Weizen Bam, No Label Forbidden Lavender Wit, Oskar Blues Ten Fidy, as of press time) on taphunter.com.

Big Hops Growler Station
Multiple locations
The Big Hops empire is still growing. It was only spring 2013 when the original location opened its doors at 8123 Broadway, which was later joined by Big Hops Huebner at 11224 Huebner, Ste 204, followed by Big Hops Gastropub at 22250 Bulverde, Ste 106 and a fourth location is on the way downtown. There’s plenty to choose from and you can find an updated tap list at bighops.com with prices ranging from $5 to $19 for refills. The beer list is Texas- and San Antonio-heavy, but you’ll also find Prairie Ale, Left Hand Nitro Milk Stout and Abita’s Rootbeer.

Blue Star Brewing
1414 S Alamo, #105
Southtown’s first microbrewery is still churning out Texican Lager and a Barnstormer Series that includes a Raspberry Geyser, a two-year aged sour blend with organic raspberries. Stop in for organic barley and hops and carry out your lot in 32-ounce medicine bottles ($8 for refills) or $14 refills for any 64-ounce growler.

Filling Station Tap Room
701 S St. Mary’s
We already gave you the 411 about Southtown’s teensy Tap Room, but here it is in case you missed it. The price for 64-ounce refills of varied hop-juice is four times the pint glass with a $2 discount. The IPA-heavy board changes every Thursday and you’d be silly not to hit up one of the most wallet-friendly taprooms in town. Visit beermenus.com for an updated list before you head down, but you’ll be sure to find Guadalupe Brewing, Dogfish Head, Breckenridge, Brooklyn Lager and a Saint Arnold or two on most days.

Freetail Brewing Co.
4035 N Loop 1604 W, Ste 105
As the brewpub turns into a beer lab of sorts in light of Freetail’s large-scale brewery, the beers are about to get a lot more interesting. You can fill up 64-ounce growlers with a $2 discount on Sundays so you save big bucks as you sample the roster of brews that included an eXXXtra Pale Ale, Bexarliner Weisse, Half-Notch IPA and Makaria American wild ale, as of press time.

The Granary ’Cue & Brew
602 Avenue A
The only thing that will help a lackluster weekday is Growler Tuesday at The Granary. Empties emblazoned with the eatery’s logo will cost you $5 for the day and half-gallon growler fills run $16, while one-quart fills cost $8. Check out what Alex Rattray’s brewing (you’ll find a seasonal, a Rye Saison, IPA and Brown Ale on most days), or what out-of-town beers they’ve tapped for the week.

GS1221
1221 Broadway
Downtown denizen can also head to GS 1221 where growlers are filled and sealed using four Pegas Craft taps that remove oxygen from the growler as it fills it with malty goodness from Texas breweries (512, Karbach, Ranger Creek) and the U.S. (Ballast point, Brooklyn, Deschutes and Dogfish Head, to name a few). Empties (available in 32- and 64-ounce varieties) are $6 and fills run $7.50 to the mid-teens.