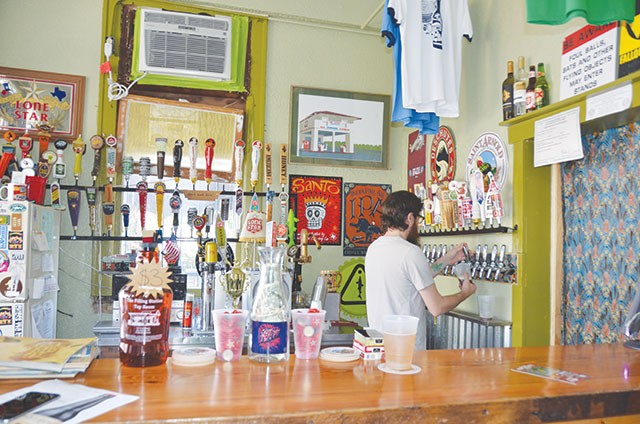 A former colleague would often say, “More is more.” This applied to everything from accessories to Fiesta decor, and it’s the mindset behind loads of tap-filled joints that own that more the merrier mantra. That’s not the case at the wee Filling Station Tap Room.

The Tap Room replaced its predecessor The Filling Station (now Station Café) in April 2012 inside 300 square-feet at the corner of St. Mary’s and King William. If you’ve got a touch of claustrophobia, the walls of the Tap Room might feel a bit too cozy. Again, the entirety of the joint fits into a 300 square-foot space—that includes the unisex restroom (that technically faces out and requires a key, whose handle is a laughably ginormous wooden Alamo), as well as storage. That’s smaller than most apartments off lower Broadway. The maximum occupancy for Filling Station is six…although seven fit quite comfortably. It’s rumored they once fit 14 to 15 people in. Various taps are tacked along the back of the bar, and the Station’s bowling championship trophy is also prominently displayed along with a smattering of beer signs and logos, craft only, naturally.

Bar manager Aaron Jarvis, who will head the beer program at Paramour this fall, has run the tap handles since its early days when one kegerator held just six beer options. A second kegarator was added a few months in, before the bar finally expanded to 25 craft-happy taps this past April with the addition of a DIY walk-in cooler built by owner John Rowe. The storage space itself is quite—excuse my pun—crafty.

Cooled using an air-conditioning window unit and a Coolbot, which turns the AC into a cooler compressor, the roughly five-by-six-foot, closed-off space houses 19 of the kegs, all varying in sizes from full to half, quarter and eighth barrels. A beer wench lift assists with lifting the full barrels up on the five-foot shelves (as Jarvis puts it, he certainly “couldn’t lift them with his little arms”).

While Rowe, an admitted IPA junkie, commandeered the beer list for a good portion of the joint’s history, public demand and Jarvis have been responsible for additions to the beer list that, even in its early stages, included a varied array of breweries on a national scale. Rowe’s a big Deschutes fan, and the West Coast will always hold several menu listings, but Texas craft has a presence with Guadalupe Brewing, Karbach Brewing, Real Ale, Saint Arnold and Southern Star all making appearances in the latest incarnation. The menu is posted on a green chalkboard with styles, ABV percentages, international bittering units (IBUs) and prices. For Rowe and co. providing great beer to Southtown and Downtown residents comes second only to their profits. This is a place for beer nerds on a budget and most brews run anywhere from $4 to $6 for a pint. Refills are available for 32- and 64-ounce growlers, with a tiny price cut for 64-ounce fills, in case you don’t want to stay inside the tiny quarters.

No, there isn’t a happy hour, you cheapo. The prices are already low as is. The Tap Room keeps a low overhead for your wallet’s sake, so don’t expect a playground and they only have one TV for Spurs games that faces out into the covered patio.

And when it comes to said beer nerds, plenty strolled in for an afternoon gulp during my visit, each sharing more brew knowledge than I was possibly ready for, while others discussed new beers they were dying to try. They discussed Google’s augmented reality GPS-based game, Ingress, what new kegs were being tapped and Jarvis turned us all onto Boulevard Brewing Company’s ginger-lemon radler. Folks trickled in and out, either asking for palate-destroying IPAs or one of the two bottled beers available (Dos Equis and Lone Star, but don’t ask for Miller, Coors or Bud Light, or you’ll get the boot) and hanging out on the breezy patio (which got a facelift earlier this year to include more shade and a brick finish).

As one of the more visible gates to Southtown, The Filling Station Tap Room lures tourists in with their healthy Beer Advocate score and shall we say, intimate, setting. Turns out it really isn’t about the size; it’s how you use it.