Filling the Void: While in COVID-19 Isolation, Live Vicariously Through Movies on Your Favorite Streaming Platforms

With everyone hunkering down at home waiting “for this whole thing to blow over,” as Simon Pegg’s title character says in 2004’s Shaun of the Dead during a zombie apocalypse, we’ve got plenty of time to explore the countless movies available on streaming services. Since most social gatherings around the country have been canceled or postponed — sporting events, concerts, school and arts and cultural exchanges among them — we thought we’d suggest a few films that will help you fill that void.

The NBA season is on hold indefinitely and the NCAA tournament is canceled, but there are plenty of sports stories streaming that you can root for from the comfort of your couch. Over at Netflix, watch the 1984 baseball drama The Natural starring Robert Redford. The film, nominated for four Oscars, follows the short-lived career of ball player Roy Hobbs (Redford), who returns to the field 16 years after a tragedy halted his rookie season. At Hulu, try the 2011 drama Warrior about two estranged brothers, Tommy and Brendan (Tom Hardy and Joel Edgerton), whose careers as MMA fighters put them on a path for a head-to-head battle. Also, Amazon Prime has the 2019 dramedy Fighting With My Family about a young woman’s journey to wrestle in the WWE; and Disney+ has Invincible, a safe and wholesome underdog story starring Mark Wahlberg about a football player who beats the odds and makes an NFL roster.

Rock Out at Home

You won’t find any full-body moshing during the coronavirus outbreak, so headbang your way to Hulu for the 2018 thriller-horror Lords of Chaos, which tells the true and extremely disturbing story of the rise and fall of the 1980s Norwegian black metal band Mayhem. At Netflix, stream Amy, the intimate and heartbreaking 2015 Oscar-winning documentary on late British singer-songwriter Amy Winehouse. Amazon Prime has 2012’s documentary Still Alive about the life and career of songwriter and cultural icon Paul Williams. Then, stream the original 1940 musical Fantasia, which features animated characters dancing and frolicking to the works of Bach, Stravinsky, Beethoven and other classic composers.

Missing your 8 a.m. English composition class? Find some solace with a return to high school on Netflix in the 2016 coming-of-age dramedy Edge of Seventeen and on Hulu with the 1989 dark comedy Heathers. The first stars Oscar nominee Hailee Steinfeld as a teenager whose life takes a turn for the weird when her best friend starts dating her brother. The latter stars Winona Ryder as a popular high school girl trying to escape the grasp of a vile high school clique. Or you can go back further to your middle-school years at Amazon Prime with 2018’s Eighth Grade and at Disney+ with 2010’s Diary of a Wimpy Kid.

So, they canceled that gallery opening and ballet you had on your schedule? At Netflix, meet New York painter Ushio Shinohara and his wife Noriko in the 2013 Oscar-nominated documentary Cutie and the Boxer, which follows the Japanese couple as they create paintings in their own unique style. Get kicked in the head at Amazon Prime with the gloriously trippy 2018 film Climax about a French dance troupe that loses their minds on LSD. At Hulu, a children’s entertainment actor terrifies a community in the 2019 documentary Wrinkles the Clown. Over at Disney+, try out the 1997 documentary Frank and Ollie about longtime Disney animators Frank Thomas and Ollie Johnston.

Fine dining is out, and drive-throughs are in, so if you’re a foodie starving for something delicious, live vicariously at Netflix with the 2011 documentary Jiro Dreams of Sushi, about then-85-year-old Japanese sushi master Jiro Ono and his Michelin three-star restaurant in Tokyo. At Amazon Prime, the 2019 documentary sequel Super Size Me 2: Holy Chicken sees director Morgan Spurlock attempt to become a chicken farmer and open his own fast food restaurant. Then at Hulu, there’s the 2017 documentary Soufra about a Lebanese woman who starts a food truck near a refugee camp in Beirut. Finally, at Disney+, go for the obvious and watch Ratatouille, unless you have a serious aversion to little rat feet touching your roasted mushrooms. 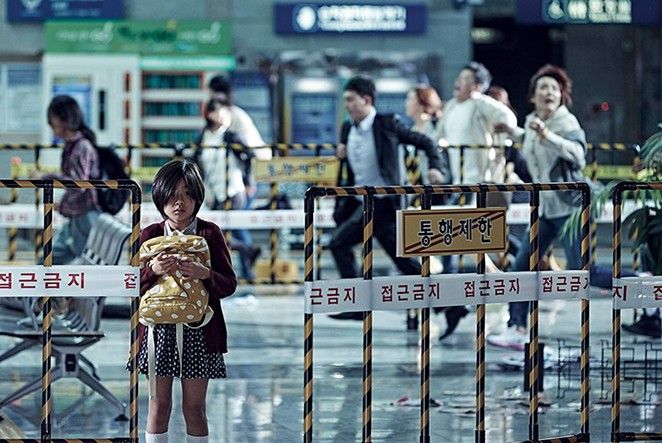 If you love to worry yourself sick, do what everyone else is doing and stream Outbreak and Contagion. You can also go to Netflix and stream the South Korean horror film Train to Busan about a zombie outbreak on the railways. Meanwhile, Amazon Prime has Annihilation featuring a team of scientists who explore a quarantined zone filled with mutated plants and animals. Hulu takes claustrophobia to the limit with the 2006 horror movie The Descent about a group of female spelunkers who must fight for their lives inside a cave filled with blood-thirsty creatures. And since you’re locked away at home, check out Tangled at Disney+ where Rapunzel’s song “When Will My Life Begin” will take on a different meaning if you’re doing this social distancing thing correctly.