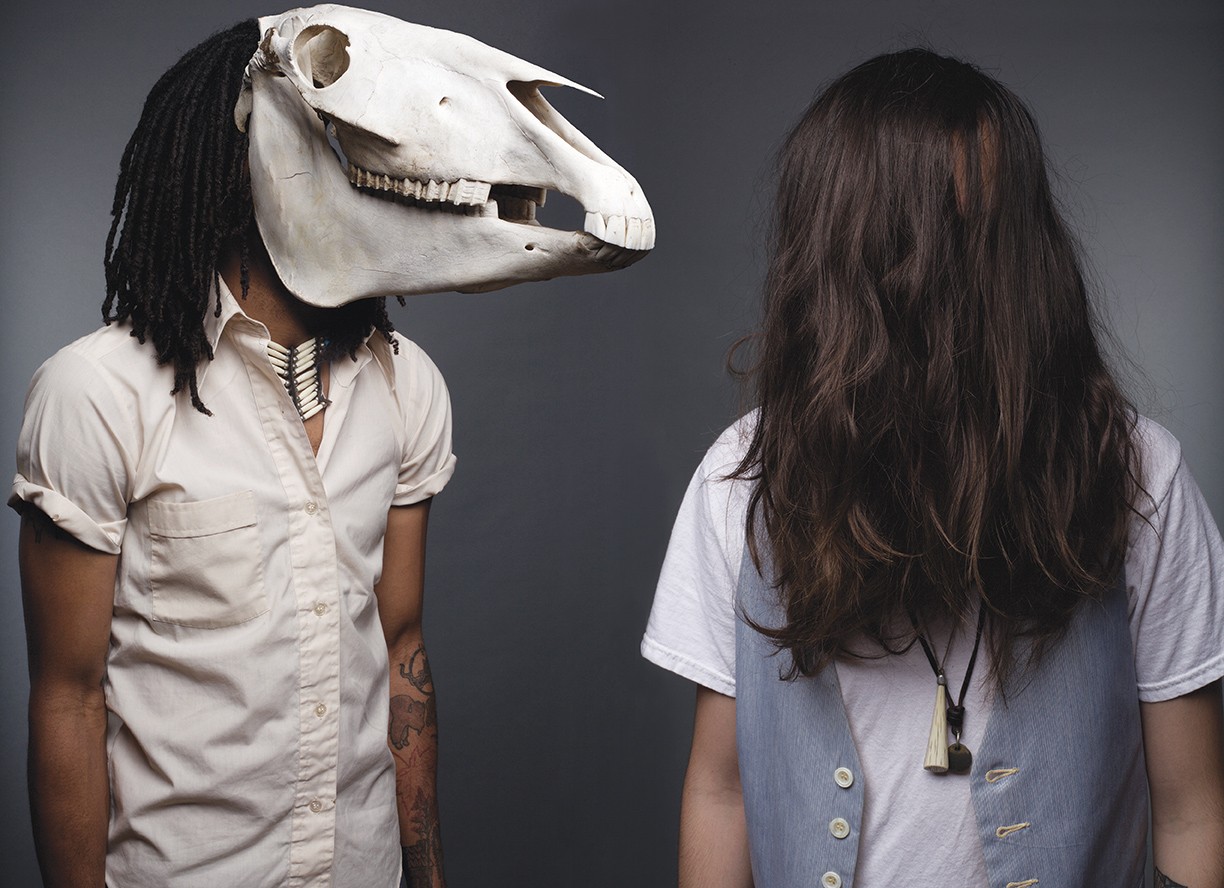 Lonely Horse guitarist Nicholas Long has a remarkable ability to make his instrument speak. Not like the rock 'n' roll camp of a Frampton talk box, but to make the thing communicate like a human voice in some forgotten language. On "Oranges," the guitar follows along in tandem with Long's melody, breaking into little comments and quips between breaths like a hype man to an emcee.

It's a sound strategy for Lonely Horse, a two-piece band with a talent for making themselves seem bigger than they appear. On Desert Sons, the band's debut record, Long and drummer Travis Hild pound their instruments with vigor, blowing up like a puffer fish to achieve their desired size.

To do this, Long and Hild often brood on the same witching-hour rock riffs. On "Red People," the pair are synced up so perfectly in voice, guitar and rolling tom thunder that Lonely Horse comes to life — a breathing organism compared to a tinny two-piece.

Recorded in January of 2014, Lonely Horse sat on Desert Sons for 18 months, dealing with the cantankerous, slow bureaucracy of the industry. On top of all the usual frustrations of waiting on a glossy, finished project, Long had to keep the wounds open that inspired the collection.

"I don't like singing these songs much anymore, they bring back bad memories," Long told the San Antonio Current. "There's a lot of emotion and aggression and I'm not the same person I was."

It's not a stretch to call Desert Sons a breakup album. Written and recorded during a divorce, much of the material has the bleeding-heart quality of the days after a rough split. "Woman," he sings on a track of the same name, "I wanted to be something good / but you were feeding me lies all the time."

When Long sings of the relationship's end, there's real pain in his voice, lamenting all the little steps leading over the edge. On "Ch. 2," he wants love, but only gets "strong convictions," singing with emotional control and crisp instrumental runs to match. But when the memory becomes too much, Long and Hild enter into a ferocious moment, building on a riff until it topples over on itself.

Within this story of heartbreak, race is a dominant theme, evident even from a quick look at the track listing. "Red People," "Black People" and "White White People" all populate the album, interacting in different states of harmony and conflict.

"Ch. 2" explains the weight of race in a codified America. Within the legal proceedings of a divorce and custody battle, Long remembers a moment sitting in silence as "the government takes my son away."

"Everybody judges with their eyes, people don't look at someone and not judge them first before they hear them speak or know anything about them," Long said. "Whenever I'd go to the judge, they summed me up before I walked in. I don't know what they were saying in their heads, but from what I could feel, they thought I was just another deadbeat black guy."

That moment of powerlessness in a prejudiced court also inspired "White White People," one of the strongest cuts on Desert Sons. "Now give me your skin," Long sings, "your white, white skin / I want to feel what it is like to just storm right in / I'll give you my skin, my black and red skin / So you can feel what it is like to have a fire within."

It's white privilege on trial here, the blinders worn by Anglo-Americans unable or unwilling to see how much black and brown suffering went into paving a white road toward opportunity. Drawing from that moment in court, Long sings of a desire to live without the imposed original sin of being black in America.

Finally, 18 months after its inception, Lonely Horse can finally put Desert Sons in the rearview, focusing on getting back the footwork for a national campaign.

"This record taking so long has been a blessing and a curse," said Long. It's forced us to write a lot and it's given us a lot of ideas of what we're going to do next and how we're going to do it. I realized that we know how to get people in emotionally but now I want people to be free. Music is like ceremony. For us, when we play a set, it's real ceremonious to play music and to share it with people."