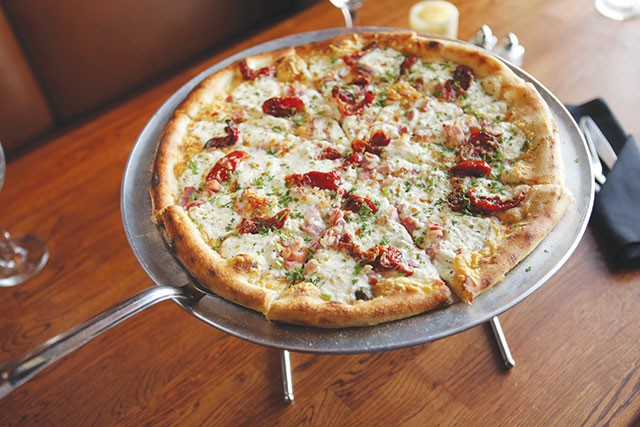 The far (… and I do mean far) North Side is getting a taste for neighborhood Italian eats by way of Tiu Steppi’s Osteria. Opened by chef Steve Warner and wife Adrienne Munoz, Tiu Steppi’s is the Italian cousin of their first eatery, Two Step Restaurant and Cantina.

Warner’s culinary career began in the early 1990s as a line cook at Romano’s Macaroni Grill, where he climbed the kitchen hierarchy eventually becoming an opening unit training captain and later shifting his training to work as corporate chef for Morton’s of Chicago, Eddie V’s Edgewater Grille and finally Wildfish Seafood Grille. In a way, Warner is going back to his roots with Tiu Steppi’s.

I first visited the restaurant during its build-out phase—just after the imported wood-fired oven had been installed—but it wasn’t until my first review visit that I was able to see Warner’s complete vision. Although the space is no bigger than 1,200 square feet, Tiu Steppi’s comes off cozy rather than cramped. The dark wood-paneled walls, chic lighting, tall bar tables, fleet of attentive servers and Sinatra crooning from the speakers would make most diners excited for what’s to come. In short, Warner’s vision of a relaxed osteria (defined on the menu as a gathering place serving wine and shareable, classic Italian dishes) definitely shines through.

For the most part the menu of antipasti, insalatas, specialty pizzas and chef’s specials, doesn’t disappoint. The antipasto plate ($9.95) was a solid start to the meal with two types of cured meats, two cheeses, olives and a small sample of pickled vegetables. The roasted artichoke hearts were a personal favorite, just seasoned enough with lemon garlic butter and a generous sprinkling of Parmesan cheese. For mozzarella fans, the bufala friti featured fresh mozza breaded, slightly fried and topped with the house tomato sauce and an outstanding pesto. Garlicky and bright, the basil-based sauce should definitely be available on other menu items.

Because the oven commands most of the room’s attention, ordering a pie or two was a given. While a build-your-own option is available in two sizes (12-inch and 16-inch at $9 and $12, respectively; toppings ranged from .95 each $2.25 each), my dining companions and I put our trust in Warner’s creations. For our first go, we ordered the house specialty, a 16-inch hand-tossed pie with a mix of five cheeses, pancetta and sundried tomatoes. The sundried tomatoes provide a definite zing to the sea of cheese (not a complaint; bring on the ricotta, I say), but I would have preferred a crisper pancetta.

A second visit landed a clear winner in the chicken and broccoli pizza with its tender broccoli florets, sundried tomatoes and roasted peppers over a creamy Asiago cream sauce. Sinful? Yes, but definitely worth it.

Diners could balance the creaminess of the cheese with a snappy sauvignon blanc out of Simi Winery. Wine buffs will enjoy the small, but affordable (priced anywhere between $11 and $22) vino selection composed of red and white wines from California and Italy. The same sauvignon would pair nicely with the prosciutto with yellow and green pasta. Made in house, the pasta was fresh and tender, a great vessel for onions, bright peas and the aforementioned Asiago cream sauce.

The restaurant’s few missteps came in the tortellini and the chicken cacciatore. Flavors were spot on, to be sure: The mushroom-heavy tortellini was earthy and rich, the tortellini filling was fresh spinach, but the pasta was tough and undercooked. Sitting atop a generous serving of Warner’s dreamy mashed potatoes (one of the few crossovers from Two Step), the rustic chicken cacciatore offering was paired with tenderly roasted onions and tomatoes, but my chicken could have spent a few more minutes on the burner.

Even so, as Tiu Steppi’s works out a few of kinks, my 30-minute wait points to signs that North Siders are a) willing to ditch Olive Garden, b) hungry for fresh neighborhood Italian and c) ready to go along for the ride.