Finding Schlitz And Self At La Kantina 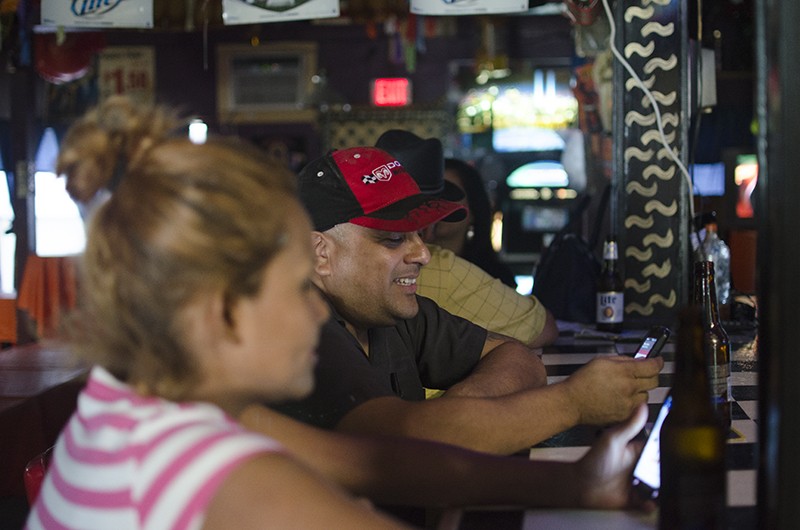 On my nightly trek home from work each night, I pass a neighborhood corner bar called La Kantina (103 Denver Blvd.) . The building demands little attention — small, dilapidated with a hand-painted logo boasting of its offerings: wine, an air conditioner, beer and darts.

What more does one truly need?

Perhaps it was the precursor of a date night spent at Barbaro having happy hour cocktails that fueled my curiosity, but on my way home that faithful evening, I decided to pop in to La Kantina for a little nightcap. I situated myself at the bar top as per tradition in my first visit to any establishment and began to absorb my surroundings. The bar top, a domino checkered tile reminiscent of a kitchen floor out of the 1950s, grabbed my eye so I shared a compliment with the barkeep.

The walls are decked in beer memorabilia from promotions past — an apparent ode to your tio's man cave behind your mom's house from which he never moved out because he lost his job at the Butter Krust factory.

Directly behind the well-lit pool table in the center of the room, a life-sized scantily clad Bud Light model cardboard cutout had me thinking I had found the corner dive bar of my dreams. As if I wasn't already thoroughly impressed by the tapestry motif and giant Pancho Villa "I WANT YOU GRINGO!" posters, I saw the arrow through my heart; in plain eyesight, cooling in the fridge, stood a tall bottle that would almost bring a grown man to tears.

"I'll have a Schlitz," I professed to the bar keep. His disbelief in my beer selection was clearly visible in his facial expression. I hadn't seen this glorious bottle in so many years and the mere sight of it took me on a whirlwind of nostalgia. I explained to my date that the reason we were drinking this awful beer was in tribute to my old man.

My dad, a religious Schlitz drinker in his younger days, had many family Polaroids donning a table full of bottles displaying that glorious old label. Each sip took me back to those Saturday mornings spent driving around with my dad listening to Roy Orbison on our way to Guzman's Ice House for breakfast (which ironically had a huge Schlitz tapestry above our table).

Just like that, La Kantina had fully won me over. We began to converse with the friendly barkeep, Richard Ramirez and I quickly learned from his tales that we had something in common — both Ramirez and I had graduated from McCollum High School. In fact, Mr. Ramirez was the first Mexican-American to graduate from our old stomping grounds.

It was apparent that my date and I were the youngest patrons in the bar that night, but once I made my way to the jukebox to select a medley of oldies and Tejano classics, our age gap didn't seem to matter much. These were just hardworking people (many of them still in their work uniforms) looking for a place to relax and have a cold one, just like me.

I left that night singing praises of my newfound favorite dive and within the next few days I had taken another batch of friends — La Kantina first-timers. They shared the exact same sentiment: the bar felt like we were having beers and playing pool in one of our own homes.

Since most of my cohorts are fellow bartenders and service industry folks, plus the fact that in SA everyone seems to know one another, I cherished the anti-Cheers feeling — a place where no one knows my name. A place where the beer is cold and the sound of an accordion-fueled good time is only a few jukebox plays away.

Although I have been a huge proponent and beneficiary of the rise of cocktail culture in San Antonio, I will forever be rooted in bars like La Kantina, because they remind me of who I am. I am a beer-guzzling, Tejano-loving, grito-throwing, jukebox-hogging, Spurs-defending, full-blooded San Antonian.