It happens all the time. A dish (or a word, for that matter) starts out being defined in one way and gradually takes on new forms and emphasis over the years. You only have to think fajitas, which began as a simple, but specific, cut of cast-off beef tossed on the coals and morphed into the theatrical, cast-iron presentation of anything that sizzles.

The same is pretty much true of tapas which originated in Spain as a simple saucer set atop a glass of, say,  sherry to keep flies out, a saucer (tapa) that was then used to hold simple snacks to accompany the libation. Manchego cheese, shaved serrano, olives, tiny clams in brine … that sort of thing. Today, pretty much anything served on a small plate is in danger of being called a tapa.

But having just returned from Spain, where I sampled an elegant sufficiency (interpret this as you will) of tapas in Barcelona and pintxos (the tapa equivalent) in San Sebastian, I can report that there, too, the tradition has long gone beyond the serving of a simple slice of tortilla Española atop your cidra (cider) or manzanilla. And yet, there’s still a sort of small-c catholicity about the tradition, with one bar specializing in seafood, another in chorizo and jamon Iberico, for example. All of which adds excitement and anticipation to the tapas crawls, often along one or two streets, that are entirely too easy to get caught up in.

We can’t easily lurch between tapas bars in San Antonio, but with a little planning, we can get a taste of the almost-real thing. Here are a few places to keep your whistle whetted. Some even serve the “gintonics” that are now wildly popular en España.

I didn’t make it to Restaurant Gwendolyn during June when chef Michael Sohocki was serving tapas on his rotating lunch menu, but the classics were there: tortilla Española (think frittata with egg, potato and onion), gambas al ajillo y mas. They were doubtless executed with the chef’s usual focus and attention to detail. But I have darkened the door of The Bin on several occasions. Chef Jason Dady calls this cottage on Grayson, the former Bakery Lorraine, a tapas bar plain and simple — and he actually has managed to (mostly) suppress cheffy instincts to turn out some very rewarding, uncomplicated bites.

The tortilla Española is kind of a bellwether for me; in Spain, the ones I liked best retained a kind of creaminess in the interior that was at least partly the result of letting egg and potato meld awhile before cooking. The Bin’s tortilla doesn’t have that baboso (literally slobbery) quality, but neither is it dry — and it’s appropriately priced at $3. The pan tomate, classically just toasted bread rubbed with the cut side of a tomato, is maybe a little too elaborated, but at $3, it, too, is a great little bite, as is the piquillo pepper with a flavorful, paella-like stuffing. But the real bargain, especially at happy hour when a single half is just .50 cents, is the perfect devilled egg with a guindilla pepper and smoky paprika. The revelation here is that the egg’s yolk isn’t totally hard, making for a more sensual experience — if one can say that about a hard-boiled egg.

There are lots of other good options, including the sensational (though sweet) grilled goat cheese sandwiches with tomato jam and the serrano-wrapped blue cheese dates. The chiste here is that the menu is largely composed of small bites that really are great accompaniments to any of the house vinos, all Spanish (I’d like to see some ciders and sherries, too, please), and, of course, the G&Ts. Only the José Andrés is served in the Spanish fashion with added aromatics (thyme, juniper berries and citrus) in a wide-mouthed glass the better to appreciate the aromas, but even in its straight-jacket Colllins glass, the Botanist with rhubarb and cucumber is a fine combination. And as there are around 30 gins and six tonic waters, nothing says you can’t invent your own combination. In fact, 180 of them. 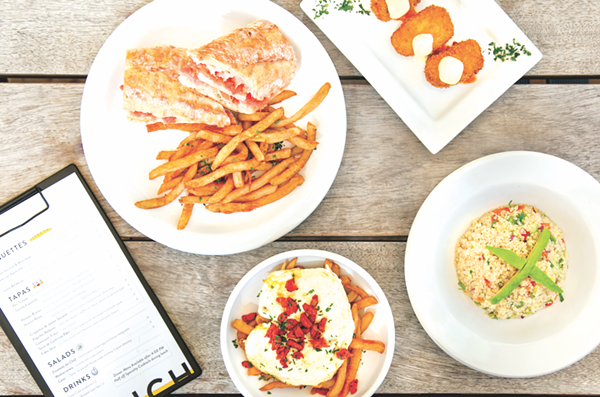 Toro Kitchen + Bar in Stone Oak is owned and operated by a Mexican family with roots in Spain, setting one up for an authentic experience. But as there is a really good selection of Spanish cheeses (manchego viejo, Valdeón,  tronchón … ) and cured meats (lomito Ibérico de bellota, jamón Ibérico carved from a leg, etc.) served tablado (board) style, the best tapas bets would seem to be these, not ones involving the kitchen. Toro’s tortilla Española is well-flavored but a tad dry for my taste; the huevos rotos, a tavern classic, placed a properly fried egg atop some listless fries and bathed it all in a paprika-inflected sauce with strident garlic overtones. At $10 for three in the evenings and on weekends, the piquillo peppers stuffed with cheese, pecans and finely ground serrano ham are nevertheless very appealing, as are the similarly priced, crusty croquetas filled with serrano ham and manchego.

Lunch tariffs are lower, but here you run another risk: the mid-day bartender may not be altogether up to speed in the G&T department. (There are plenty of good wines, however.) But when all wheels are turning properly, Toro’s G&T’s are the only ones in town served properly — at least by current Spanish standards. I’d hope for some Spanish gins in the future; for now, the Mallorca with Botanist, star anise and lemon peel is well worth your attention.

Northside, Midtown … and now Southside: Luna Rosa on E. Military is not necessarily the place you might think of as a tapas joint — especially when you note that the menu ranges all over the Caribbean as well, and even touches on New Mexico. But a little sleuthing will undercover three, resolutely Spanish-style offerings: a tortilla Española, papas bravas, and croquetas of ham or cod. Let’s start with the cod as it’s ubiquitous in Spain but otherwise mostly MIA in San Antonio.

The croquetas are 3-inch cylinders, crumb coated and deep fried, and the cod does taste of what it is—but that’s not a bad thing at all. The coating is crunchy, the filling is creamy, and if you want to ask for a little of the Sriracha mayo that adorns the papas, ándale. Some might find the ham version milder, but just order both and compare; you get four for $3.80. Papas bravas are also everywhere in Spain, and Luna Rosa’s rendition, involving fried quarters of small potatoes with the above-mentioned sauce, can claim at least a kissin’ kinship.

But the real surprise is the tortilla. Priced at $6, it’s a tart of about 8-inch diameter full of onion, quartered potatoes and, of course, egg.  The rendition is a little coarser than most I had in Spain, but the spirit is more than willing. Beer is probably the safest drink option here; there are several good, bottled ones. Beer would not be out of place in Spain either.