Finding The Elusive Bob Dylan In The Heritage Of SA Music 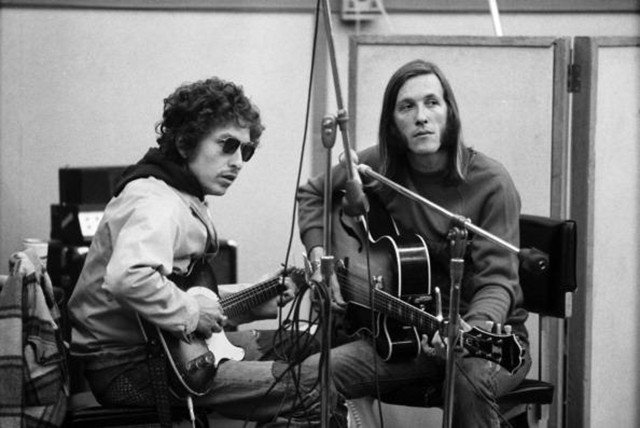 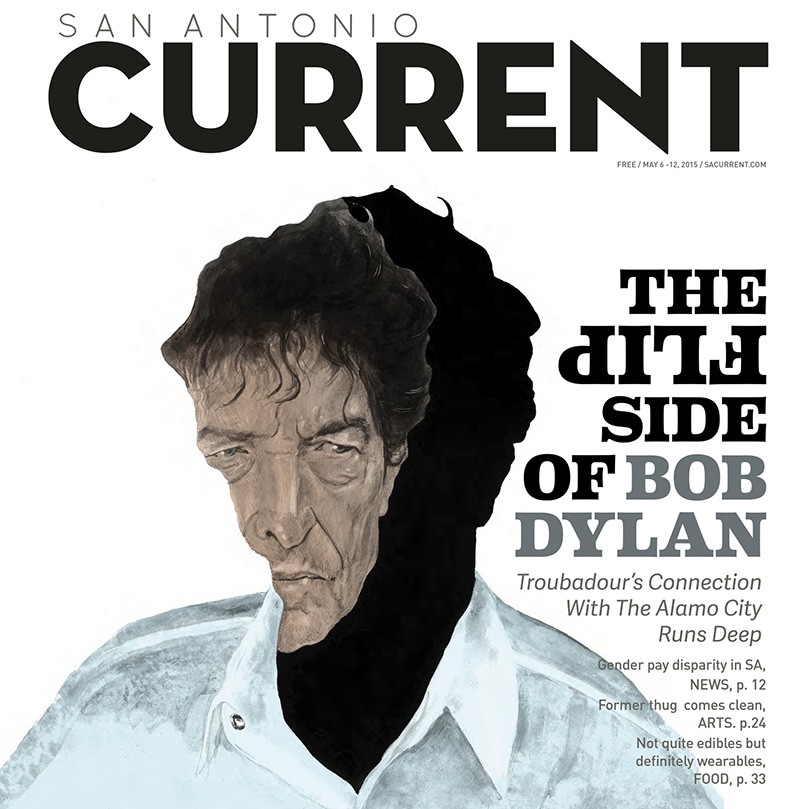 A young man with an imagined name in an ill-advised corduroy hat. A Freewheelin' iconoclast making impeccable art with a jaw and wit like a razor. A recluse. A Born Again. An old man on an endless tour, posing as a wizened cowboy figure.

Since his debut in 1962, Bob Dylan has been a man of masks, using his personas to eek out some new creative truth. But with each new milestone or misstep, he remains aloof, carving at the emotions of his characters but rarely his own. Asking us, "How does it feel?" but refusing to answer the question.

"The masks make it easier for him to perform," said David Yaffe, a Syracuse University humanities professor and author of Like a Complete Unknown, a cultural study of Bob Dylan, né Robert Zimmerman. "When you see him playing 'Visions of Johanna' acoustic back in 1966, he's pouring everything he has into it. But when you have a character you're playing, it's liberating."

His newest character is something of a lounge singer. On Shadows in the Night, Dylan's 36th studio album, he tackles the snap-a-long crooner songbook of Frank Sinatra. The initial public response was quizzical, akin to the sports world collective jaw-dropping when Michael Jordan defected from hoops for minor league baseball.

Consistent with Dylan's elusive tendencies, the recording process for the standards effort was all under wraps. Dan Fornero, a trumpeter and session musician, recalled the live recording of the album.

"For certain artists, they don't tell you who'll you'll be playing with before you enter a session," Fornero told the San Antonio Current. "The artist doesn't want to broadcast that he's even in town ... but when it's on a level like Bob Dylan, it's gonna get out. So I don't remember being told that it was for Dylan, but then I came in and thought 'oh, that's Bob Dylan right there.'"

Over pedal steel guitar and horn accents, Dylan is understated and rough, doing Sinatra his way. Without a gleam of nostalgia or vocal excess, Dylan digs into the American songbook with complete reverence.

"I love these songs, and I'm not going to bring any disrespect to them," 74-year-old Dylan, who rarely gives interviews, told AARP Magazine earlier this year. "To trash those songs would be sacrilegious. And we've all heard those songs being trashed, and we're used to it. In some kind of ways you want to right the wrong."

Bob Love, the AARP Magazine editor-in-chief who interviewed Dylan for the album, understands Shadows in the Night as another side step of expectations, taking on a pop music tradition he helped dismantle in the '60s.

"I think that's a little known or little understood point about Bob Dylan — that he came of age in the '40s and early '50s," Love told the Current. "A lot of that music that didn't survive the '60s was really part of who he was musically. Even emotionally. He's said that he would sneak off to a Barry Goldwater rally or see Billy Graham. These are not things that you would associate with an icon of the '60s."

Bob Love's interview with Dylan, the singer's first sit-down in two years, came about in a rather curious way. With an ace marketer's awareness of his target demo, Dylan gave the album away to 50,000 AARP members and handpicked Love to speak with him in a Berkeley, California hotel. Over the phone, Love received the address, then the floor, then room number, in a rigmarole suited to a meeting with a head of state.

"When I accepted the assignment to go interview him, I looked at the old interviews," said Love. "And if you're a journalist about to interview him, those things will give you a heart attack. Because you don't really know what kind of snarling enemy of the press is gonna be in front of you. But he turned out to be terrific, warm and open in this case."

For years, Dylan subscribed to a shoot-the-messenger philosophy towards the press. On the 1965 classic "Ballad of a Thin Man," Dylan loads a sawed-off shotgun of insults and reproach, pulling the trigger on those with pencil in hand asking blunt questions.

In a famous, extended press conference in 1965, Dylan looks awfully bored, messing with interviewers like a cat toys around with a doomed mouse. In a buttoned-up blazer and a disengaged voice that consulted a few too many cigarettes the night before, Dylan responds with short answers and jokes for himself.

Though he's elusive through most of the hour-long session, Dylan reveals an important sliver of truth, one that was born and bred right here on SA's South Side.

"Are there any young folk singers or rock groups that you would recommend for us to hear?" asks a journalist in the back.

"I'm glad you asked that," said Dylan, with a laugh morphing into a cough. "Oh yea, there's the Sir Douglas Quintet. I think they're probably the best."

Sir Douglas, of course, is San Anto native Doug Sahm, born six months after Dylan, in November 1941. At the time of Dylan's glib press conference, Sahm was in his faux-royalty days, posing as a mop-top Englishman in an attempt to enlist in the British Invasion. Though the façade was lifted on a live performance on NBC, Sahm and his San Antonio crew still managed a 1965 hit, "She's About a Mover."

With 15 weeks on the chart in the U.S. and over three million units sold in Europe, much of the English-speaking world agreed with Dylan. With a trued backbeat, wildman organ and untameable spirit from Doug Sahm, Dylan found inspiration in the San Anto crew.

"Bob Dylan saw Doug as authentic right out of the box in the middle of Doug's most fake period, trying to pass himself off as British with the Sir Douglas Quintet," Joe Nick Patoski, director of All About the Groove, a forthcoming doc on Sahm said in an interview. "Dylan saw completely through that."

Meeting sometime in 1965, the pair found solace in each other's company. Dylan, forever in search of the authentic in American music, found the real thing in the football-chinned San Antonian. Sahm was looking for just the same, what he called "the groove" in his own argot. Performing with Hank Williams Sr. and learning from San Anto soul icon Spot Barnett, Sahm had a pitch-perfect ear and a flawless track record in real-deal music.

"I think they both found something with each other that they really liked," said Margaret Moser, Tex Pop curator and founding music editor of the Austin Chronicle. "They were both these rebels that came out of places that didn't accept what they were all about and yet what they were all about was where they came from, as much as anything else. Dylan's search for authenticity is really clear in his music and has always been part of his goal and vision. It's easy to see why he would see that in Doug Sahm, who absolutely was of the Texas earth."

Shawn Sahm would have an idea about that. Doug's son and protégé, he speaks in the same jive idiom as his father, slipping between dubbing him "Doug" and "dad" — a lingual byproduct of growing up with a Texas musical icon.

"I believe that people like Bob Dylan and Jerry Garcia, people who are very musical-minded people, very into the real thing, I think they kinda gravitated towards Doug Sahm," Shawn told the Current. "Guys like my dad, they came from that old school world. He started playing Western Swing as a child, he did the blues thing, he did the rock thing, the Tornados. When you put all that together, Doug was the kind of cat that musicians just gravitated towards 'cause he was such a musical guy.'"

It took seven years for the pair to work together, on Sahm's 1973 Atlantic début, Doug Sahm and Band. Recorded in New York, Sahm's third solo album is a manic self-portrait of a man filled with different styles of music, trying to pack a lifetime of American roots into 45 minutes.

Dylan contributes the heartbroken "Wallflower," a tune of sobbing banjo and Augie Meyers' consoling organ. "Wallflower, wallflower, won't you dance with me?" sing Dylan and Sahm, splitting the bill. "I'm sad and lonely too." Singing into the same microphone, they sound like a couple bloodhounds baying over the thorns in their paws.

Doug Sahm and Band was a vital cameo for Dylan, helping to coax him out of a reclusive period. Shortly after recording with Sahm, Dylan entered the studio for Pat Garrett & Billy the Kid, his first effort since 1970. "He showed up at these sessions and all of a sudden, people were saying 'hey what's going on,'" said Shawn Sahm. "And the reality was he was just hanging out with his buddy Doug."

More importantly, Dylan's experience with the Doug Sahm band altered his direction in music for years to come, helping place the troubadour on an instrumental groove. In an interview for Slow Train Coming, a documentary on Dylan's Born Again music, iconic producer Jerry Wexler recalls a moment during the Doug Sahm and Band recording.

Since then, Dylan's records have largely been band records, with a murderer's row of deft musicians backing the great wordsmith of American music. To see Dylan on the endless tour is to see his band exploring the catalogue, with Dylan's voice as just another instrument.