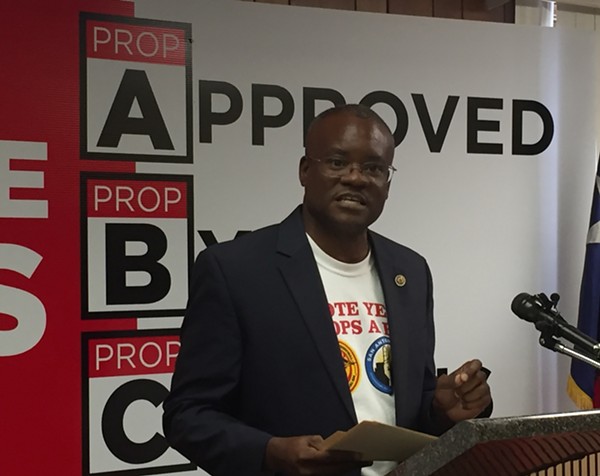 Chris Steele, the fire union chief leading a contentious campaign to amend San Antonio's city charter, faced both a felony criminal charge and a civil suit from the state of Texas in the '90s, according to court documents.

The criminal charge was ultimately dismissed, but Steele signed a voluntary compliance agreement to settle the civil suit.

Steele, who was unavailable for comment at press time, has been the public face for three charter amendments San Antonians will vote on November 6. The measures are largely viewed as payback for the union's stalled contract talks with the city.

According to court documents, Steele was indicted by a grand jury in late 1994 for tampering with government records — specifically, a Texas ID card — with the intent to "harm and defraud" the state. He has worked for the San Antonio Fire Department since the 1980s, according to city documents.

That criminal charge was dropped before it could come to trial, court documents show, although no reason is listed. The filings also do not provide additional details about the crime of which Steele was accused.

At the time, Bexar County Assistant District Attorney Rita Spiegel wrote in a court document that the case could be investigated further and might be refiled as a Class C misdemeanor. The Current was unable to find a subsequent charge, however.

In a 1993 court document, "without admitting the truth or falsity of this allegation," Steele agreed to stop selling "deceptive multi-level marketing materials" and to cease offering financial plans that didn't live up to their advertised benefits.

David Crockett, a political science professor at Trinity University, said the decades-old legal issues could present problems for the campaign because Steele has been so closely associated with it. "A lot of this comes down to branding and framing of this for people who haven't made their minds up yet," Crockett said. "As we've seen on a national level, things from 40 years ago can come back to hurt you."

The past complaints are just the latest hiccup for the union's San Antonio First campaign.

Early this week, the Go Vote No campaign, which opposes the ballot measures, circulated a 49-second sound clip that appeared to be Steele telling firefighters that the amendments were meant to force the city back into negotiations. He also said they could help "our own guy," Councilman Greg Brockhouse, unseat Mayor Ron Nirenberg.

On Wednesday, Steele held a press conference appointing two surrogates to speak for the campaign and said he'd only discuss the amendments themselves. The event spiraled into chaos after Steele ignored questions about the recording and walked out.

"I think it is offensive," one of the new spokespeople, labor attorney David Van Os, scolded the media in the room. "I mean, don’t the firefighters have as much right to participate in the political process as everybody else?"

Contacted shortly after the conference, Brockhouse said he's unfazed by the recording. He added that Steele is deliberately backing away from the limelight because of personal attacks from Nirenberg and others.

"You can't take on a radio or a television without someone personally attacking him," said Brockhouse, who once consulted for the union. "Everyone's after him."