First-Ever Cured For A Cure Dinner Packs In Talent 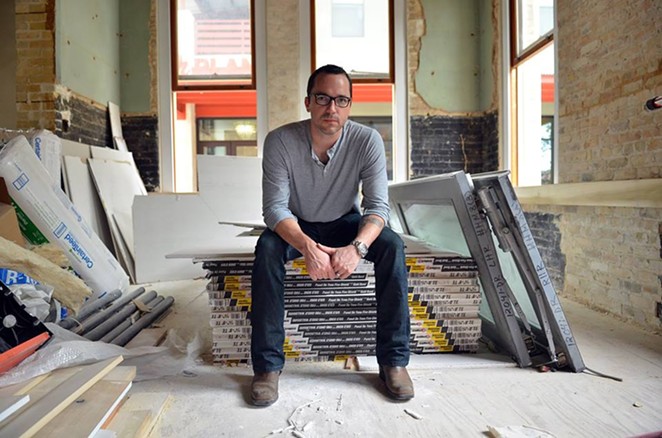 Blood-related cancers are no joke. And as a survivor of non-Hodgkin's Lymphoma since September 2010, chef Steve McHugh is serious about helping fund the San Antonio Leukemia & Lymphoma Society. His philanthropy is a major gain for local foodies as the chef-owner of Cured, most recently named one of the best Southern Restaurants in the U.S. by Southern Living, has invited a trio of celebrated chef pals to help him deliver a five-course dinner at Cured (306 Pearl Pkwy., Suite 101, 210-314-3929) on Sunday, September 13 at 6 p.m.

"I ran into Mike Gulotta, who I used to work with under John (Besh) during Atlanta Food & Wine Festival and I said 'I need to come up with a reason for you to come to San Antonio'," McHugh said. He settled on hosting a dinner at Cured that would allow the chef to showcase his skills while bringing in chefs from the outside, while putting together a great event.

Gulotta of MoPho in New Orleans will join John Tesar of Dallas' Oak and Knife, and Phillip Lopez of Root, Square Root and Root Squared in New Orleans in creating the feast. Tickets for the event aren't cheap. At $350 per person, the chefs are hoping to inspire would-be donors to the LLS to share in an experience.

"We're all going to donate our time and food...people are already planning on donating, why not give it to us and have a great meal out of it as opposed to writing a check and mailing it in," McHugh said.

The menu for the night has already been announced with each chef taking on a course.

"We're all so different. I wanted the chefs to come in and be themselves," he said. The ticket price will also include complimentary valet parking, a welcome reception with passed hors d'oeuvres and live music, the five courses and wine pairings.

McHugh, who was first diagnosed in January 2010, has served on the board of the Leukemia & Lymphoma Society since 2014.

"I've always been a big fan of Light the Night in October and we wanted to do something before the walk. It so happens that September is blood cancer awareness month and it's relatively quiet at the restaurant — the kids are back at school and it's not convention season yet. We're hoping for a good turnout," he said.

Tickets are available through LLS.org.