Last month, as a few friends and I strolled down South Alamo, we found ourselves starving, cold, and in need of some kind of shelter. It wasn’t quite Into the Wild, but you get my drift — when, lo and behold, we found ourselves in the alley behind Blue Star Art Gallery where a kid wearing some kind of oxygen mask was drummin’ up attention for himself, literally. People gathered on the stairs leading up to Loft 120, while we huddled near someone’s car — we didn’t quite feel like we were at First Friday, it was like we had entered an underground party, or at least we were about to.

After some really pissed-off guy broke up the hardcore drumming session, we made our way into Juan Garcia’s loft (located in building 121 of Blue Star), where Garcia, a member of Flickr-Club-SA, opened up his three-level apartment to the art-seeing crowd. Although the space was small, people were bumping into one another to get in. This month expect no less from the happening studio. Flickr-Club-SA members Rick Barrera, Daniel Day, Beth Hudson, Marquelle Limon, Edward Luévano, Daniel Olinick, Chris Pichado, and Marianna Urrutia will display their photography works at his
studio. An art exhibit with works by Vanessa Centeno is also planned.

Flickr-Club-SA is a Flickr.com group started by James Rider in January 2007. It has since grown into a photography club with more than 300 members. Pictures of local attractions, historic streets, and anything else that captures members’ attention are uploaded to the site. It’s a great place to check out the gritty side of San Anto, the kind of stuff that doesn’t quite interest tourists but locals will find some depth in (of the over 4,000 photos on the page, I fancied the images of vacant buildings, retro signs `the Pizza Hut on Fredericksburg Road`, and the ice storm of January 2007).

Over at Joan Grona Gallery, Brian Jobe’s exhibit Tuft vs Turf, a six-month long project born on a ranch in Boerne, makes its home in the city. Jobe uses zip ties to create sculptures that may be misleading to the unattentive eye (or at least to anyone looking at the pieces from a distance).

The show will remind Jobe followers of his past exhibits (his 2006 show Starfloss, or “Cable tie chair,” created in 2005). His work is an observation of natural and human environments. The outdoors comes indoors with this inventive series of pieces, and his use of zip ties redefines “our perception of objects they are bound to,” according to his artist statement.

When it comes to Global Warming, let’s not forget about the opinion of our nation’s children. They care, too, y’know. Say Sí visual- and media- arts students present an Earth-themed exhibition of sculptural artwork inspired by their garden and focusing on organic and natural surface tension — and also a film screening of an environmental documentary commissioned by Listen UP! and Adobe Youth Voices. 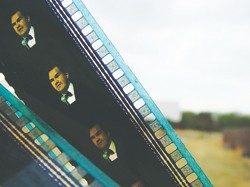 If you didn’t check out Candace M. Briceño’s show in October 2007 at UTSA Satellite Space (she was part of the textile-art group show Fabrication), you’re in luck. Briceño brings out her signature hand-dyed felt presented in cutesy flower designs for her solo show Wonderment. Expect a wallful of flora to greet you.

This exclusively Latina show is the first of its kind to hit Blue Star. The lineup includes 14 visual artists and six writers showcasing work in painting, photography, film, and word. The joint effort (with help from the University of Texas at San Antonio) expresses themes that go beyond Women’s History Month, according to exhibit curator Artutro Almeida. Also, be prepare for a packed house: Blue Star is hosting the opening of two other exhibitions, Goin’ Mobile and A Comfortable Distance, and both are enticing. •