First Words: What Could Go Wrong With Campus Carry? 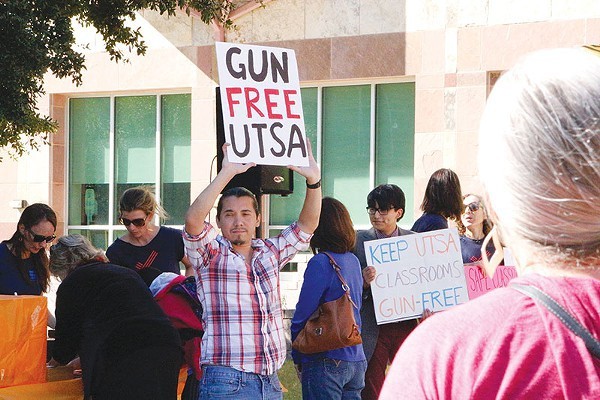 On "UTSA Releases Preliminary Recommendations for Gun-Free Zones"// Don Mathis: College campuses have a high concentration of people. Millennials, aged 18-33, are the country's most-stressed generation. Suicide is the second leading cause of death among college students. Homicide is the second leading cause of death for people aged 15-24 years. More than half of all people who (commit) suicide do so by firearm. Drug use is highest among people in their late teens and twenties. 39 percent of college students engaged in binge drinking in the past month. Guns on college campuses; what could go wrong? [sic]

On "Blue Bell to Return to All San Antonio H-E-B Locations on Monday" // Michael Orbe: Nope! The food industry has 1 rule. Send out safe foods. If your food company cant do that I'm not looking for anything they put out. [sic]

On "New KISS Restaurant at AT&T Center Sets Opening Date" // Carlos Valdes: So during the spurs games we can rock and roll all night? [sic]

On "Guess How Much Texas Paid to Lure WrestleMania 32 to Dallas" // Benjamin Nicholas: I remember when Wrestlemania was cool... Back in 1987 [sic]

Send your thoughts, comments or kudos to letters@sacurrent.com