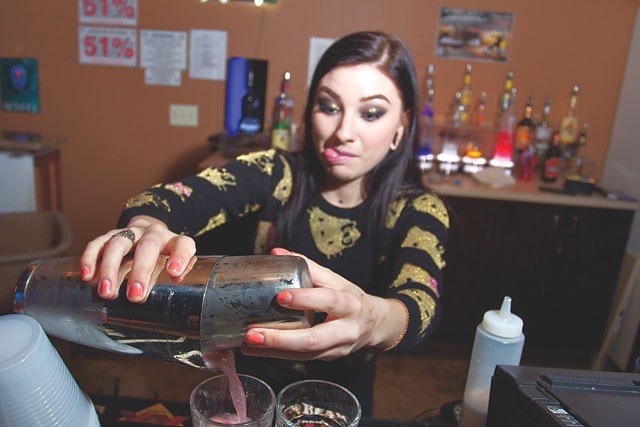 My first visit to Fitzgerald's was unexpectedly filled with Wrangler-wearin' cowboys, Texas country music, and the discovery of a nearby head shop called South Coast Smoke. Tucked away in the San Pedro Place shopping center (just outside loop 410) with no visible sign, I barreled into the live music venue on a Friday night when a band suitably named Smoke Wagon was playing. I paid the $5 cover and, upon entering, I quickly realized the space was small but packed a solid sound system and a spacious red-curtained stage. Before exploring the rest of the place, I dashed over to the bar to grab my customary whiskey, only to discover a familiar concept — the "Beer and Shot" special: Lone Star and a shot of whiskey for $5 or a Bud Light (in an aluminum bottle) and a shot of whiskey for $6. (The other live music venue that bids such pairings has more selections.) The bar offerings were pretty standard, with typical domestic and import beers available, the usual liquors, and not much else. It's a pretty straightforward bar with no frills, craft beers, or fancy cocktails. After being suckered into a Lone Star and a shot of whiskey instead of just a lonesome whiskey, I wandered around and stumbled upon two pool tables, a patio, and an area called The Yard that is slated to be an outside venue. As the band played Pat Green and Randy Rogers Band covers, I couldn't help but notice how diverse the crowd was. Again, the aforementioned cowboys were out in full effect with their boots and cowboy hats on, but there were also the quintessential drunk girls wearing what I presume to be their best club attire, ordering a very girly, gimmicky brand of vodka shots while giggling and saying to one another, "Damn, you're drunk!" A tall guy wearing a Social Distortion T-shirt was also fluttering about, seemingly annoyed with the boisterous broads at the end of the bar (or maybe that was me who was annoyed). All ages seemed to be out that night, ranging from patrons pushing their 50s, to younger, overzealous boozers hell-bent on getting fucked up. And then there were people who genuinely wanted to enjoy the music and get down to some good ol' country sounds, hollerin' and yellin' at the band, which by the way, was pretty damn animated and engaging. Although I happened to show up on a night when country prevailed, don't mistake Fitzgerald's for a honky-tonk or dancehall. The venue strives to showcase various genres, with local bands such as Heather Go Psycho, Dark Planes, The Heroine, and Los De Esta Noche playing past shows, along with touring bands rolling through San Anto. Not quite a year old (opened in July 2012), the venue certainly has potential to contribute to the growing music endeavors happening about town, hopefully bringing quality shows people will pay to see. In the past, the venue has offered its stage to basically any band willing to play, on the fly, welcoming and encouraging all genres. My exploits at Fitzgerald's could be considered a little bit country, a little bit rock and roll, and everything in between. One thing's for sure though: Fitzgerald's is serious about live music and offers a little bit of everything for everybody.