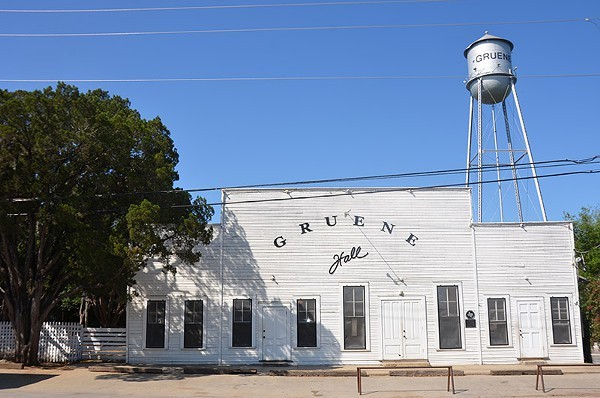 As we celebrate the 40th b-day of Gruene Hall, in all its importance to the township and John Travolta, let's not forget the key role the building has played in the music of Texas. Behold, the greatest live recordings of all time from Gruene Hall! Or, at least the greatest recordings we could find at Gruene Hall in fifteen minutes searching YouTube!

Playing the hall just after her 83rd birthday, Loretta Lynn gave a sold-out performance with a big-ass band on Gruene's small-ass stage. Like in rap, in country music you can tell someone is the real deal if they've got a small thesaurus of nicknames — The Coal Miner's Daughter, The First Lady of Country Music, The Decca Doll, 2013 Presidential Medal of Freedom Winner.

Walker: "Let's see if we can wake everybody up here with a little 'Trashy Women.'"
Guy One: Woo!
Guy Two: Yeah! [In creepy, malt liquor uncle voice]

Way too creepy Guy Two! You're probably the same YouTube user who put up this recording of Jerry Jeff's '89 live album with a poorly formatted misogynist power point of VH1 celebs in less-than-glamorous moments. Lord knows we just wanna see the album cover. And maybe that one pic of Jerry Jeff looking like Foghorn Leghorn.