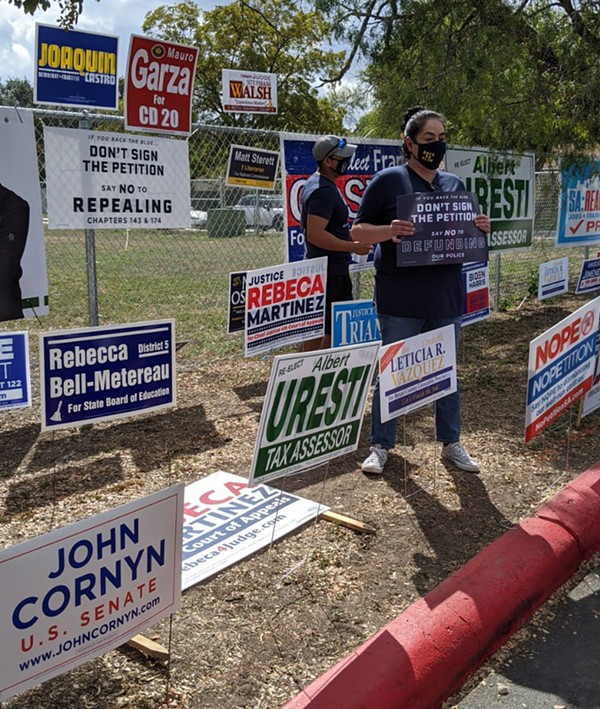 On October 20, a San Antonio activist who goes by the name Justice the Musician arrived at Cody Library to collect signatures from early voters for a petition to repeal the part of the Texas Government Code that gives police officers the right to collectively bargain.

Justice was working on behalf of advocacy group Fix SAPD, which sees the police union’s collective bargaining power as a primary obstacle to law enforcement reform in the city.

His day was proceeding normally as he talked to voters about the petition and Fix SAPD’s vision for reform. Then law enforcement officers showed up.

“All of the sudden, you hear these people who were saying ‘Lies! Fake news!’ These police officers with guns on them, not in full uniform … which was crazy, because this security guard was like, ‘Woah, this is nuts.’”

Over the course of the day, eight presumptive law enforcement officials appeared at the early voting, Justice said. Some were wearing badges and T-shirts with the San Antonio police union branding. Some carried guns. They held signs that told voters to “Say NO to defunding our police,” and they verbally confronted potential signatories.

To Justice, it seemed like the protesters’ presence actually prompted some voters to sign the petition. Still, he was afraid enough for his own safety that he called organizers from the organization Texas Tool Belt to come and escort him to his car.

“I was afraid that the police officers were going to jump me or something,” he said. “It got that bad.”

Fix SAPD ultimately turned in more than 20,000 signatures, giving voters across the city the chance to repeal Chapter 174 of the Texas Government Code in the May 1 citywide election. That measure will be listed as Proposition B on the ballot.

But the harassment and intimidation multiple Fix SAPD members said they faced while collecting signatures in the winter may be a sign of things to come as the repeal campaign heats up in advance of the election.

Canvassers who worked for Fix SAPD on the signature drive said they had positive experiences talking to people across the city about their effort — including with police officers and their families, some of whom signed the petition.

But they also maintain that they faced a level of intimidation and harassment atypical for a political campaign — even in today’s highly charged climate.

“I’ve spoken to people from city hall, and they have spoken about how SAPOA [San Antonio Police Officers Association] will stop at nothing about their relentlessness to do whatever it takes to keep [Chapter 174] intact,” police-accountability activist Valerie Reiffert said. “I believe wholeheartedly that that includes putting Fix SAPD people in danger.”

Neither SAPOA nor the San Antonio Police Department responded to a request for comment on this story.

Diaz also said he’d heard reports that Fix SAPD canvassers were “physically aggressive in their efforts to get their signatures on a petition to weaken and defund the police.”

In the aftermath of that press conference, Fix SAPD canvassers said they saw a marked increase in hostility from people around the city.

“After Danny Diaz made his statement, it was very evident: people would literally get in my face and threaten to do violent stuff,” Fix SAPD canvasser Todd Milam said. “People are going to be aggressive and crabby about stuff that they don’t like, but they need something ... to make them feel like it’s okay to be violent.”

Members of Fix SAPD told the Current Diaz’s statement was designed to do just that — mark the petitioners as outsiders whom San Antonians had reason to fear.

“Everybody started freaking out,” Fix SAPD’s Josey Garcia said of the atmosphere following Diaz’s presser. “People started going to the Next Door app talking about [how] we’re dangerous people going through the neighborhood. And that’s when the threats really started.”

Diaz’s statements caused such a stir that four of Fix SAPD’s 42 paid canvassers subsequently left their jobs in fear.

“They said it wasn’t worth risking their lives like that,” Garcia said.

The canvassers who remained on the job continued to face harassment and abuse, as they had from the first weeks of the campaign, Fix SAPD members allege.

Over his months canvassing, Milam said he was chased away from one property with a shovel. He also had to aid a fellow canvasser in another neighborhood after five men surrounded the volunteer’s vehicle.

Multiple canvassers said that they were followed while out collecting signatures, and Garcia said that the group was surveilled by a middle-aged white man in a Jeep at a location where petitioners regularly gathered. The group had to cease meeting at that particular location, and some canvassers were relocated to different areas of the city.

One young canvasser, Dominic Treviño, was threatened with a gun when he knocked on a door on the East Side. Treviño filed a police report on January 6, but said he’s not been contacted about the incident since.

Much of that aggression came from regular citizens, some of whom called the police on the canvassers, according to volunteers. But, they added, some of the intimidation also came from police officers and other law enforcement personnel themselves.

In addition to police physically showing up at sites where canvassers were collecting signatures, several activists said officers tailed them as they worked, and, in one case, warned a canvasser that they were in pro-police neighborhood.

Garcia said canvassers, by and large, chose not to file police reports about the alleged harassment since they feared retaliation.

Justice said that while he collected signatures at Julia Yates Semmes Library on November 3, he encountered people protesting the Fix SAPD effort who later told him they were ex-convicts hired by SAPOA.

“They fully know, as adults, the consequences of what they’re doing,” he said. “They know that people are going to take these actions in their name, and they’re completely disconnected from the consequences, legally and financially.”

So far, SAPOA’s campaign urging voters to reject Fix SAPD’s ballot proposal hits the same notes as its campaign to defeat the petition drive, accountability advocates say. They argue the union is distributing campaign literature that misrepresents Fix SAPD’s platform and what repeal of Chapter 174 would actually mean.

One door hanger paid for by SAPOA’s political action committee announces that “Anti-Police Activists want to Weaken and Defund Police” and threatens that repeal of Chapter 174 repeal would mean “slower response times, and more crime.”

A repeal of the union’s collective bargaining rights wouldn’t affect the police budget, Fix SAPD advocates point out. It’s also unclear how changes to officers’ labor contract could affect call response times and crime. Even so, other cities in which police power has been threatened, such as Portland and Minneapolis have seen slowdowns in response time to calls, according to media reports.

Last week, SAPOA’s Diaz held a press conference at which he again alleged that Fix SAPD’s core motivation is “defunding the police,” a slogan that hurt Democrats in November’s midterm elections.

But Fix SAPD members says any portrayal of its organization as radical or unconcerned about San Antonio’s public safety is absurd. Its canvassers included students, religious leaders, current and former military and law enforcement officers, longtime civil rights leaders and people whose families have been victims of police violence.

“When we’re sitting there and telling our youth this is the perfect time to use your voice to stand up for this city, we’re met with hostility, threats of violence,” Garcia said.

In less than two months, voters will decide whose message they agree with.

“It takes courage and it takes bravery for people who are not affected by this to stand up and make those changes,” activist Reiffert said. “And I just hope that the city of San Antonio remains courageous at the ballot box and votes yes to repeal chapter 174.”