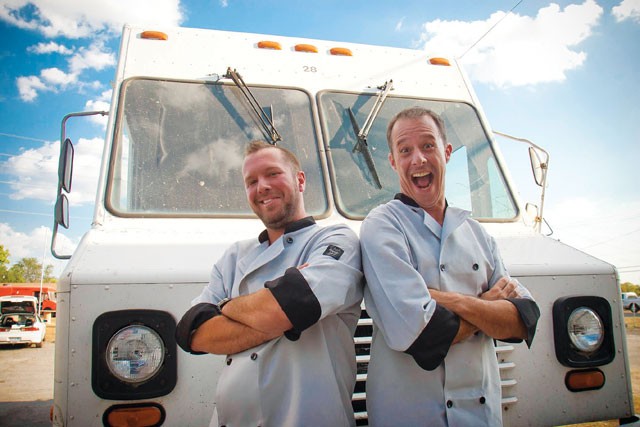 The restaurant biz has taken a beating in the last few years, with top chefs from New York to Las Vegas closing shop, or at least contracting their empires. Trends continue, though, and with versatility and low costs a must for new start-ups, the urge for mobility is being taken literally by many trying to grab the dream of owning their own restaurant. This season’s must-have for a fine-dining kitchen is a set of wheels.

One of SA’s newest food trucks won’t roll out of the coachwork shop at Boardwalk on Bulverde until September’s First Friday artwalk, but Say-She-Ate owners Brandon McKelvey and Jason Paschall have already enjoyed three soft openings, lugging a tent and a four-hundred-pound grill to events to test the waters. I caught up with them during Second Saturday in front of LoneStar Studios, where they were throwing down some amazing sliders and fries. From 20 feet away, you could see something special was up. Every trade has a distinct work rhythm; decked out in chef’s coats, the two moved food with the signature blend of flash speed and showmanship that takes years on the line to perfect.

The sliders were made of Akaushi beef, a top breed of Kobe cattle only found in Japan and Texas. Plopped on a toasted sweet roll with caramelized onions and a dab of home-made aioli brimming with the warmth of roasted garlic, they were incredibly juicy, proof of the high percent of monounsaturated fat marbled Akaushi beef is famed for. The fries were equally exotic, done Belgian style, double-fried and flecked with Herbes de Provence and cooked in rendered duck fat. McKelvey and Paschall call their fare “comfort food,” saying that it should not only taste good and be healthy to eat, but instill a bit of nostalgia in the dining experience. With posh beef, aioli, and duck, I was feeling nostalgic for France, Italy, and Japan all at the same time (and I’ve never been to Asia).

When the Say-She-Ate truck hits the streets of Southtown next month, it will house a commercial kitchen equipped with fryers, flat top, steam table, plenty of refrigeration, and a Vulcan range. And the chef’s coats aren’t an affectation. McKelvey trained under Bruce Auden at Biga, while Paschall has worked Italian, French, and Asian-fusion houses and has owned his own chef-run restaurant before. If they need extra help, they are backed up by two other capable chefs, Drew Borgstedte and Halston Connella, another Biga alumnus. A changing menu of five to 10 items will be available from a list of over 40 recipes that demonstrate a familiarity with New American cuisine, with strong European flavors and Texan ingredients, like duck confit fritters with infused Bourbon glaze. Southern specials like chicken and waffles are scheduled, too. It looks good on paper, and so far, says McKelvey, the response from other mobile chefs has been positive. He points out that while some people may think that having a corner to yourself at a well-traveled spot might be good for business, he believes that a group of food trucks gathered together makes a dining destination. Some of the other ventures in town that the Say-She-Ate guys look up to are Chef Jason Dady and his DUK Truck, Chris Martinez’ Rocker Dogz cart, and the Tapa Tapa truck. Might we see them hanging together soon? McKelvey demurs, allowing that many people are working behind the scenes now to establish food trucks downtown. So, where will Say-She-Ate debut First Friday? Stay tuned for that news, too, soon to be posted online at their Facebook page and website, saysheatetx.com. •