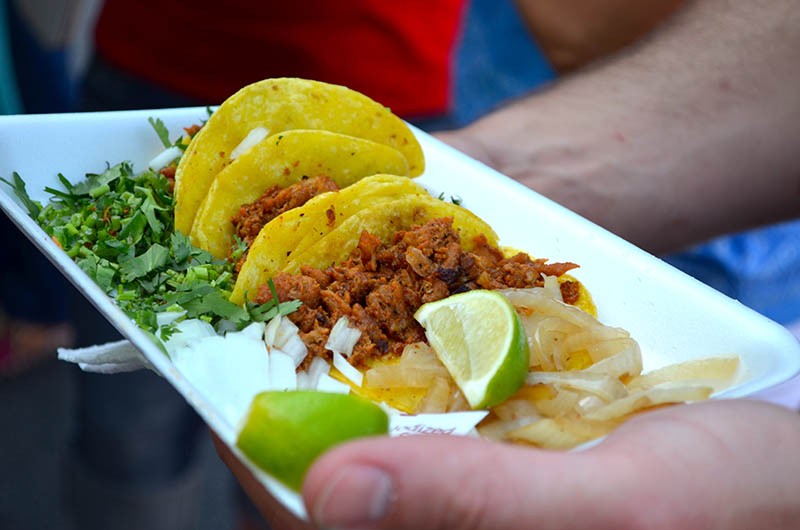 Cullum's Attagirl (119 Kings Court) may have just started serving up hot chicken (this one's made with three types of peppers, and will clear your sinuses real quick) last week, but there's a new food truck dishing out a similar poultry dish during Fiesta. Blue Truck Chicken, co-owned by Tennessee native Trey Porter and partner Melanie Castillo, will launch during Barrio in Plaza Guadalupe on Saturday from noon to 8 p.m. A second appearance is set for this year's King William Fair on Saturday, April 25, from 10 a.m. to 6 p.m. The chicken, available boneless as an open-faced sammy or wings, is paired with homemade chips, coleslaw and pickles.

While stopping by for my monthly taste of Spam at L&L Hawaiian Grill, I learned of the 19th annual Alamo Aloha Fiestaval, a Hawaiian-style celebration of Fiesta which will be held at Trader's Village, 9333 S.W. Loop 410, on Saturday and Sunday from 10 a.m. to 7 p.m. The fest will include a "Going to the Beach" car show, contemporary jams and island reggae, arts and crafts and Hawaiian snacks from local food vendors, Aloha Kitchen (read: more chances for Spam).

Hitting up Fiesta this weekend? Take a moment to stop by and check out the progress on RockerDogz's not-yet-open location at 906 S. Laredo on Saturday from 6-9 p.m. The beloved cart, owned by chef Kris Martinez (former executive chef of Aldaco's at Sunset Station), has been around since 2011, cranking out red-wine reductions over all-beef dogs and funky combinations like the spicy Thai Kickboxer with cucumbers, Sriracha and cabbage slaw. The event, complete with live music and vendors, will serve as a fundraiser for new kitchen equipment inside the location. Martinez and staff hope to open by mid-summer. The menu for the fundraiser will include the Thai Kickboxer and tricked out tots ($8), chili cheese dog and tots ($8) and "Korn on the cob" ($5).

Looking ahead, the fifth annual Twisted Taco Truck Throwdown, slated for May 9 from 4 p.m. to midnight, has announced its lineup of competing trucks. Last year's grand champion, The Grilled Jalapeño, will return to defend its title, while Teka Molino, Gracie's Kitchen, Dona Kika Tacos y Gorditas, Mini Tacos El Maicol, Pancho's Mini Tacos, El Amigo Tacos, Truck N' Taco, Mr. Meximum, Lady Picoza, Hippie Mommas, Cheesy Jane's and Sir-Wacha will all vie for best al pastor taco in the land. The event will feature $1 al pastor tacos from 4 to 8 p.m., and other signature items will be available in case tacos aren't your jam (you may want to consider moving from San Antonio).